Two Teen Sisters Beaten By BlackLivesMatter Protesters – For Being White…VIDEO

Stockton police[1] are searching for the suspects in a vicious attack that happened on Friday against two teenaged sisters. It all happened at a Black Lives Matter vigil being held in Stockton, CA where a black man was fatally wounded by police for ignoring officer’s commands to drop his handgun. The teenage girls were not participating in the protest, but just passing by. They both believed they were attacked because they were white. 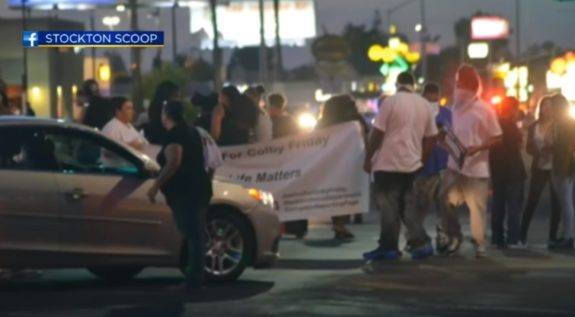 What was supposed to be a peaceful protest remembering Colby Friday turned into a vicious brawl directed against two sisters, and now, investigators are looking for suspects.

“Our understanding is that it involved several out-of-towners whose intent was more than protesting,” said Ron Freitas, the Assistant District Attorney for San Joaquin County.

Stockton police say the protestors claimed to be connected with the Black Lives Matter movement and were protesting recent officer-involved shootings against blacks.

WARNING to white people: Don’t let your curiosity put you in danger. Black Lives Matter protests are filled with thugs who think white people are the devil and are the reason for all their problems. It is really dumb to be anywhere near those ‘protests’ because so far police officers have been killed, reporters wounded, property trashed and looted, and the biggest target is a white person. So if you’re white, just stay away. This is the new America… thanks Obama for the ‘No Go Zones’.