The United States, though founded on Judeo-Christian ethics, has become increasingly hostile to Christianity. From the president to private citizens, secular crusaders have fought to abuse the rights of Christians and now, even the UFC president has joined the crusade against Christians by asking athletes to stop thanking Jesus.[1] 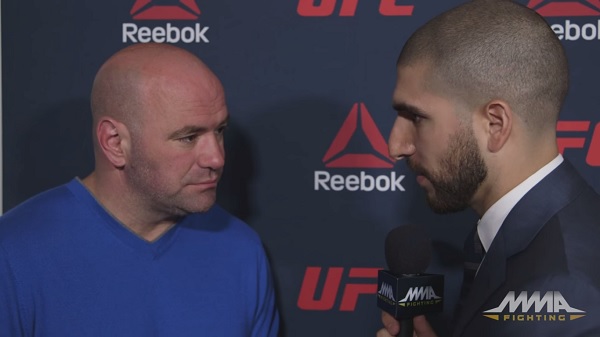 We discussed the controversy of the UFC’s Yoel Romero having the audacity to say the word “Jesus” live on television. Leftists accused him of hate-speech against the gays and called for his job.[3] UFC President Dana White has weighed in on the matter.
“America doesn’t want to hear your thoughts on Jesus. Keep that stuff at home – religion, politics, all the stuff. When you’re fighting and being interviewed, they want to hear about the fight. It’s awesome you love Jesus. Love Jesus all you want. You just don’t have to do it publicly.”

In Dana White’s defense, there was a time where he once caved to political correctness far less than the the heads of most other sports/entertainment organizations. As of late though, he’s been incredibly inconsistent. Both he and Ariel Helwani (the interviewer) agree that it’s was blown out of proportion, and Dana even said “I know for a fact that’s not what [Yoel] meant.” Still, he wants fighters to stop thanking Jesus.

Here’s my view. The fighter earned his speech, he just went through hell and back in a cage-fight and won. He deserves his time on the mic, and as long as he isn’t inciting any kind of violence, the guy should be able to thank whomever he wants.

Here’s a question: let’s say a fighter said something in support of gay marriage and/or Allah, and instead pissed off the other half of the country that wasn’t pissed off last Saturday. Would he feel the same way? Or would he have to cater more to the outrage brigade. Oh that’s right… I don’t quite think Conservatives would be so offended from somebody’s personal opinion.

Because you know… tolerance.

Our rights are being squeezed at every turn and our culture is suffering severe decay. When a fighter cannot even thank Jesus for the strength he has received, it is time for Americans to take a good, hard look at who we are and where we’re heading as a nation.