UGH: Border agents told to ask illegals if they may qualify for Obama amnesty

What more could Obama do to piss off immigrants who went through the process of immigrating to the US legally? Start interviewing lawbreakers who have come across the border illegally to give them information about qualifying for Obama’s Amnesty…. no seriously this is a new policy for Border Patrol Agents [1]when they catch a lawbreaker. 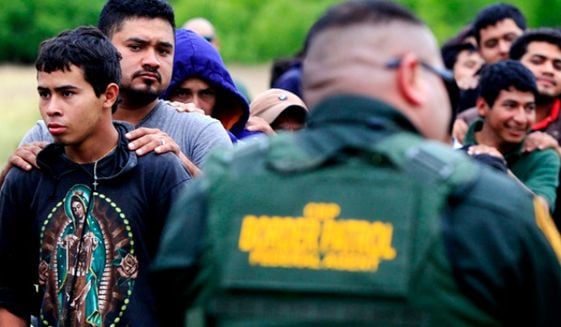 It’s getting tougher and tougher to work the immigration beat on the southern border. In the old days, you looked for people sneaking across, tried to catch up to them, rounded them up and shipped them back home so we could begin the process all over again. These days, with new orders being handed down from Washington, you need to put them through a quiz show application first to make sure they know whether or not they might qualify for amnesty.
The White House has ordered federal authorities to inquire of any illegal immigrants they happen to come across during the course of duty: Do you know whether you qualify for any type of amnesty grant under President Obama’s recent deportation order?

The Associated Press obtained internal documents detailing the new procedure for federal authorities — namely, agents with Customs and Border Protection and with Immigration and Customs Enforcement. The directive, which comes from the Department of Homeland Security, is a decided departure from normal U.S. immigration enforcement proceedings, AP reported. Rather than putting immigrants in charge of proving their qualifications for staying in the United States — under the terms of Mr. Obama’s policy — it puts the government in charge of identifying those individuals who might qualify for leniency.

Border Patrol agents report that immigrants are crossing the border, and in some cases surrendering while asking, “Where do I go for my amnesty?”

I am so fed up with the Fed and their complete disregard for the well-being of this Nation and the will of the people. Do they even remember what the purpose of Federal Government was? They are not even attempting to fulfill ANY of their initial responsibilities for which they were created.