Under OBAMA’S Watch, ISIS Carries Out Their Most DREADFUL Massacre To Date

With ISIS and their heinous acts in the news as often as they are, there is risk at the world becoming desensitized to their evil…that can never be allowed to happen. The terror, torture, and pain that they are inflicting on humans, needs to be very real to us, and to the next President that takes office, because the one we got now is doing nothing…so they think they can do what they want, and now they have done something SO horrendous that “evil” is no longer a strong enough word to describe them.[1] 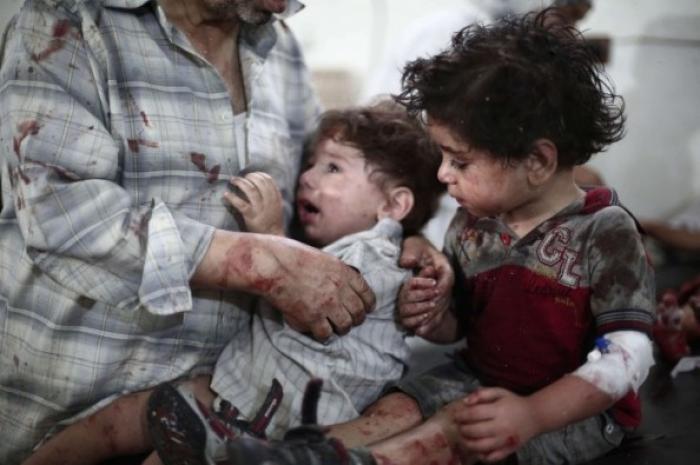 As reported by Breitbart:

“At least 150 people were beheaded yesterday by ISIS in the massacre of Deir al-Zour, including dozens of women and children,” reported the Italian ANSA news service, citing local sources in Syria.

State officials in Damascus place the number of deaths at 300, of whom most were women, children and elderly. Some of the victims were allegedly crucified.

The jihadists carried out a door-to-door massacre of civilians in Ayash and Begayliya, two Deir al-Zour neighborhoods controlled by the Syrian regime, sources reported.

The UK-based Syrian Observatory for Human Rights said that Islamic State soldiers kidnapped at least 400 civilians from families loyal to the regime from the Begayliya area during their attack Saturday, transferring them to the western countryside of Deir al-Zour. The Observatory confirmed that among the dead were also soldiers, paramilitaries and their families.

The attackers first targeted military positions, but on being repelled, moved on to slaughter civilians. “They sent six suicide bombers first and they tried to break into military positions but they failed,” said one Reuters source.

ISIS is doing just as the Quran instructed them to do. Consider the following passages:

God revealed His will to the angels, saying: “I shall be with you. Give courage to the believers. I shall cast terror into the hearts of the infidels. Strike off their heads, strike off the very tips of their fingers.” (Sura 8, Verse 12)

“When you meet the unbelievers in the battlefield strike off their heads.” (Sura 47, Verse 4)

Even if we were to dispute the historical context of those quotes, that doesn’t change the fact that Mohammad himself ordered beheadings. Maybe if liberals actually bothered to read the Quran they could stop pretending that Islam is a religion of peace.

Door to door massacres of men, women, and children…and just in THIS one wicked round, that’s 300 lives lost to horrific deaths…parents watching their children murdered and feeling helpless as they see the fear on their child’s face, or children watching their parents murdered and in those moments before they meet the same demise, the feeling of confusion and loneliness they must feel through the terror of it all. Did they ever get a chance at feeling ‘joy’ in their lives? All the while… Obama has the nerve to tell the world that “CLIMATE CONTROL” is our biggest threat…he really pisses me off.