Apparently, uttering words that you don’t believe, somehow offends people so badly that they feel the need to sue everyone in the world until their beliefs are enacted.  That is at least what a group of atheists are doing in their attempt to remove the words “under God” from the Pledge of Allegiance.  A New Jersey teen has been fighting to keep the words, and celebrated a major victory this last week.[1] 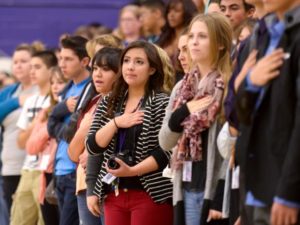 “A conservative legal firm is claiming victory after an atheist activist group announced that it will not appeal a recent New Jersey trial court decision in favor of the presence of “under God” in the Pledge of Allegiance.

A press contact at the American Humanist Association, the atheist group at the center of the legal battle, confirmed to TheBlaze on Monday that its legal arm will not be appealing the case.

The Becket Fund for Religious Liberty, a conservative legal firm, also put out a press release earlier in the day claiming victory and announcing that the atheist group had “thrown in the towel” on the case.

“The decision to give up the case marks the Becket Fund for Religious Liberty’s fifth victory in a row defending the words ‘one nation under God,’” read the press release.

The conclusion of the case means that the legal firm successfully represented New Jersey high school student Samantha Jones in her quest to defend the Pledge after atheists sued in state court in an effort to strip “God” from the traditional wording.

“I’m so grateful to know that I will be able to continue reciting the pledge in peace,” Jones said in a statement. “Ever since I was little, I’ve recited the Pledge of Allegiance because it sums up the values that make our country great.”

The American Humanist Association’s decision not to appeal the ruling comes two months after a New Jersey judge threw out the group’s lawsuit that argued that “under God” is a violation of the state’s constitution.

State Superior Court Judge David Bauman had already expressed doubts about the atheist-led lawsuit during oral arguments back in November, noting that he saw no evidence of bullying or mistreatment of atheists as a result of “under God,” according to Fox News.”

We all love an underdog story, especially when that underdog is defending something they believe in so wholeheartedly.  Atheist or not, the decision makes sense as they aren’t required to say the words are a part of the pledge, but requiring others to not say it is an violation of their rights.