A US Army veteran who was wounded in Afghanistan is incensed that a Canadian judge has ordered the release of a former Guantanamo Bay inmate[1] who was convicted in the attack that left the veteran blind in one eye. 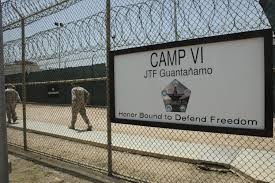 Toronto-born Omar Khadr was convicted of war crimes, including throwing a grenade when he was 15 years old that killed U.S. Army Sgt. 1st Class Christopher Speer in Afghanistan during a 2002 firefight.

Layne Morris of Utah, who lost sight in one eye from shrapnel during the skirmish, said Khadr’s release Thursday was worrisome.

“This is a man who has demonstrated a willingness and a capability to do great harm to Canadian society and Western interests in general,” he told the Deseret News newspaper in Salt Lake City.

Khadr, son of an alleged senior al-Qaida financier, said he categorically rejects violent jihad and wants a fresh start. He plans to finish his education and work in health care.

“I’m sorry for the pain I’ve caused for the families of the victims,” he told reporters after his release on bail. “There’s nothing I can do about the past but I can do something about the future.”

Khadr spent 10 years in the U.S. prison at Guantanamo Bay, Cuba. Since 2012, he had been held in Canada, serving out an eight-year sentence handed down by a U.S. military commission in 2010. He was once the youngest detainee at Guantanamo, arriving there at age 15. He is now 28.