If you believe the federal government[1]:

Some 691,000 children went hungry in America sometime in 2007, while close to one in eight Americans struggled to feed themselves adequately even before this year’s sharp economic downtown, the Agriculture Department reported Monday.
The department’s annual report on food security showed that during 2007 the number of children who suffered a substantial disruption in the amount of food they typically eat was more than 50 percent above the 430,000 in 2006 and the largest figure since 716,000 in 1998.
Overall, the 36.2 million adults and children who struggled with hunger during the year was up slightly from 35.5 million in 2006. That was 12.2 percent of Americans who didn’t have the money or assistance to get enough food to maintain active, healthy lives. . . .
The findings should increase pressure to meet President-elect Barack Obama’s campaign pledge to expand food aid and end childhood hunger by 2015, said James Weill, president of the Food Research and Action Center, an anti-hunger group.

Why am I suspicious of this story? Maybe it’s because it comes with this map showing widespread hunger in the Deep South: 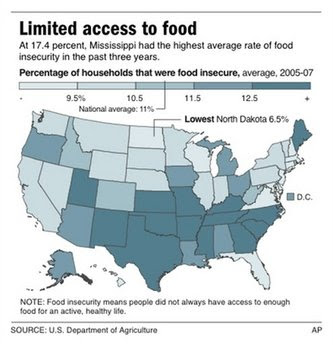 Which I ask you to compare to this map illustrating childhood obesity:

Eric Bost, under secretary at the U.S. Department of Agriculture (USDA), noted[2] that in 2005, 600 Texas children underwent amputations because of complications caused by type 2 diabetes.

So if you believe the government, not only can jet fuel melt steel — sorry, 9/11 Truthers — but the Biscuit Belt has gone from feast to famine practically overnight.

(Cross-posted at The Other McCain[3].)