Utah Brings Back the Firing Squad for Executions 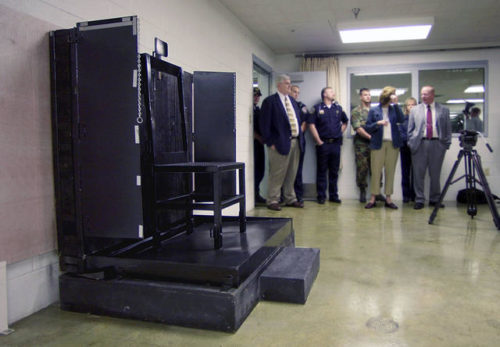 Three convicted murderers will face execution[2] in Utah. All three have chosen firing squad as the method. Utah Governor Gary Herbert brought this method back as a legal means of execution in 2015 after a hiatus of 11 years. The dates for these executions have not yet been set.

As a method of execution, firing squad is one of the older ones in our nation, with hanging being the other. As is the case with other means of carrying out the death penalty, such as lethal injection or electric chair, there is a protocol to be followed. In the case of the firing squad, each person who participates in firing a weapon at the execution must complete three rehearsals, be a licensed law enforcement official and pass a firearms proficiency test.

The three condemned individuals who have selected firing squad in Utah are cold blooded killers. They are Taberon Dave Honie, Troy Michael Kell, and Ralph Leroy Menzies. They are all guilty of murder, with Honie also guilty of raping the mother of his ex-girlfriend in front of her grandchildren. Justice can’t come soon enough for evil human beings like these.

Capital punishment is exactly what it says; punishment. It is punishment for crimes so heinous that only death is an appropriate sentence. If an individual wants to avoid the death penalty then he should refrain from killing people. There is no sympathy for a person who chooses to take the life of another. And for justice to be served, his life will be required of him.

When these three men meet their end on the business end of a gun, the chapter will be closed. Their deaths will not bring back those they killed. But it will answer the need for justice to be served. May the families take some small comfort in knowing they paid for their crimes and they will not be able to hurt anyone else.

In John Hawkins’ new book ‘101 Things All Young Adults Should Know’, he teaches in number 16, “Be nice until it’s time to not be nice.” For these three despicable men, it’s time not to be nice.