One of our Wounded Warriors who was exposed to serious harm during active duty was rushed into the Mather VA hospital in Rancho Cordova, CA by his wife during an attack SO serious, he they both questioned whether he would come out of it alive. Unable to leave his vehicle without assistance his wife made strides to get help…there was none[1]. What happened next will have you FURIOUS! 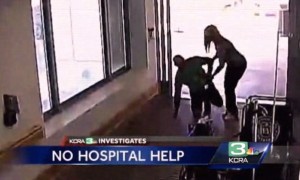 Sometimes there’s not much that needs to be said and this is one of those times. After all, a picture is worth a thousand words.

When Navy veteran, Steve Fehrenbacher, was rushed to the Mather VA Hospital for emergency care, he was suffering such intense pain his wife told reporters she wasn’t sure whether he was dying or not.

While reading her story, I was immediately reminded of the THREE HUNDRED THOUSAND veterans who likely died while waiting for help – nearly as many deaths as WWII claimed, as we reported here, and the false records and insane wait times for veterans literally dying for help we reported here, or the story of Doug Chase, a veteran diagnosed with a brain tumor who finally got an appointment – two years after he died.

As you watch this video, remember the hospital administrator, in his interview with the news reporter, claimed that “technically speaking” the hospital had done everything correctly. He also refused to tell the reporters whether the hospital personnel had been disciplined over this incident.

I’m really hoping presidential candidate Donald Trump sees this video and picks up his cell phone and pen as he did for another ill veteran at one of his rallies recently. In fact, maybe we all should be picking up our pens and phones demanding better treatment for the men and women who VOLUNTEER to protect us.

Fire those nurses…they have NO idea what an honor it is to be in position to help our wounded warriors! How DARE they show no hustle to assist a hero in need. Those aren’t real nurses..they are frauds. A REAL Nurse, wouldn’t hesitate to help another, ESPECIALLY one of our Soldiers!