Illinois students were furious when an unidentified teacher stomped on an American Flag in the middle of a tirade for some reason.  Upon hearing this, Veterans from the community[1] are coming to their defense. 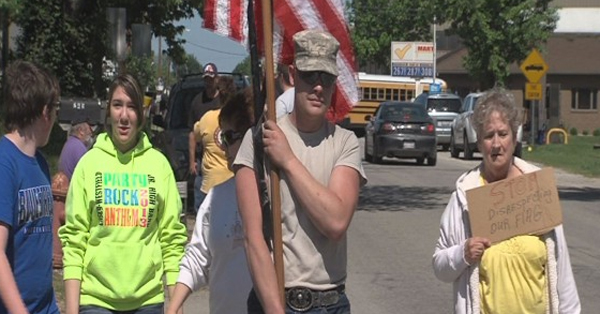 Wanting to replace the image kids witnessed when their teacher had a meltdown and started stomping on the American flag, veterans in an Illinois community gathered this week for a grand show of patriotism.

“I’m very proud of these kids that have stood up for what they believe in,” Nicholas Gibson, father and Marine Corps veteran said.

“It should have never happened,” Gibson told WTHI News Tuesday.

All the school district has will say is that the teacher has been put on leave for the remainder of the year.  Personally, I think he/she should be put on the unemployment line, but this is Illinois.