VIDEO: 82 Year Old Black Grandmother Has Had It With the Democrat Party, And she Wants Everyone to Know Why

People are jumping off of the Democrat bandwagon in droves, but few do it in an epic way. Joyce called into C-SPAN while President Obama was early voting to tell everyone listening that, despite being a life-long Democrat, she voted a straight Republican ticket this election. But the fun doesn’t stop there, she continues to tell everyone within earshot exactly what the Democrats have “done to her people.”[1] 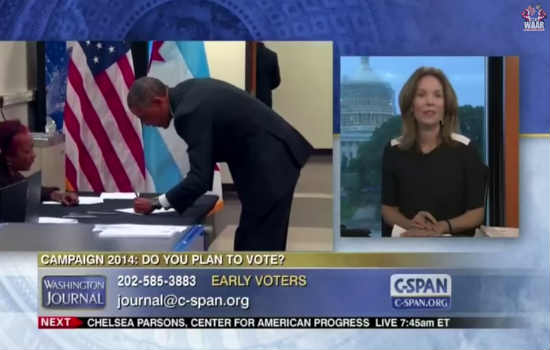 According to Tea Party News Network:[3]

The woman called into C-Span during the time when Barack Obama was doing his early voting. She identified herself as Joyce and indicated that she is an 82-year old black grandmother who has been a Democrat her entire life, but voted straight down the Republican ticket this year. Her voice is filled with both anger and passion as she explains why she has left the Democrat Party.

It is worth listening to the entire two-minute segment. She begins by saying, “First, let me start by saying that I am an 82-year old, black, senior citizen grandmother and I voted straight Republican because I have been noticing for years what the Democrat party have done to my people.”

She then unleashes stone, cold facts on the devastation the Democrat Party has unleashed on blacks and how her eyes became opened to their ways. She’s in Texas and had some choice words for Democrat candidate for governor Wendy Davis that I’m sure the Davis campaign will not want to use in a campaign ad.

Listen to the epic video below:

Thank you, Grandma Joyce, for coming to your senses and realizing what we’ve been preaching for years. Welcome to the side of true freedom and choice; we hope you enjoy your stay.