Police were engaged on a high speed chase with a guy on a motorcycle. However, the maneuver one of the officers used[1] when they caught up with him is proving to be controversial… 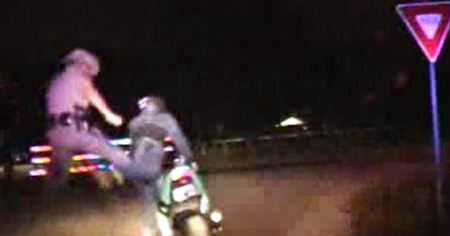 Their perp decided that fleeing from cops in speeds that reached 138 MPH was the way to go out.

In a now controversial move the officer in pursuit unloaded his fire arm at the motorcyclist hitting him once in the thigh.

This finally makes him pull over. In a moment of frustration or anger or adrenaline the officer decides that a flying kick was definitely the best move to make here.

What do you think? Excessive use of force? Or does the officer deserve lunch and a high five?