VIDEO! Best Christmas present ever? Heartwarming moment app developer reveals to his parents he had paid off their mortgage

Amazing…For Joe Riquelme’s parents, the miracle came in the form of a plain white envelope containing a handwritten note from their son telling them he had paid off their mortgage.[1] 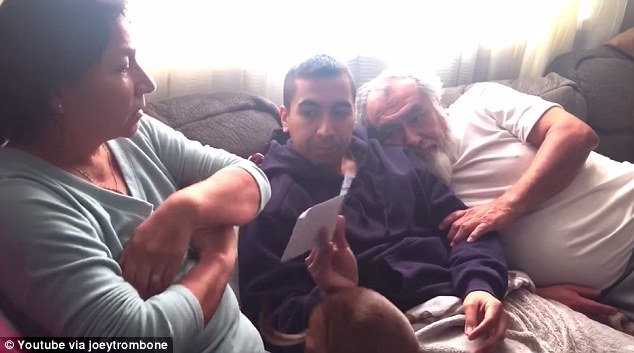 There are Christmas miracles after all.
For Joe Riquelme’s parents, the miracle came in the form of a plain white envelope containing a handwritten note from their son telling them he had paid off their mortgage.
Riquelme, a successful app developer from New York who goes by the YouTube user name joeytrombone, on Thursday shared a video showing his parents’ heartwarming reaction to his incredibly generous Christmas gift.
The touching video, which has been viewed nearly 130,000 times in the last 24 hours, and counting, begins with Joe Riquelme sitting on a couch with his parents and their pet dog.
Looking visibly nervous and struggling to keep his emotions in check, Riquelme tells his mom and dad that he has one more Christmas gift for them: a slightly dog-eared envelope folded in half.
Inside, there are documents from Bank of America accompanied by a handwritten note that reads: ‘Your house is paid off. Merry Xmas. – Joe.’
In the corner, Riquelme drew a box with a list of three things his parents had done for their family with check marks next to each one: raising kids, college loans, mortgage.
Confronted with the note, Riguelme’s mother covers her mouth in shock and bursts into tears of joy mingled with laughter as her son labors to keep his composure.
The overwhelmed woman then passes the envelope to her husband, who also begins to weep.
‘I love you. Thank you, Papi,’ Riquelme’s mom exclaims through sobs while showering him with hugs and kisses.
The emotional minute-long video concludes with a group hug.
‘Sometimes the best gifts come in the lamest packages. Merry Christmas everyone! — feeling happy,’ Riguelme later wrote on his Facebook page.
A graduate of University of California at Davis with years of experience working in the semiconductor industry, last year Riquelme founded the New York-based startup Videoshop – a video-editing app available for the iPhone.

It is always nice to see children give back to their parents. Parents work sometimes the most selfless jobs in the world. However, without them we would not get very far. Always remember to give back to the people who helped you become the person you are today.