VIDEO: Black teen on her way to job interview is beaten and robbed by female gang

If you want to see the two absolute opposite ends of the decency spectrum, look no further. On one end, we have the victim, a 17 year old girl who was headed to a job interview at the local mall. On the other end, we have a gang of girls who “punched her, kicked her, and stomped on her head,” according to the victim’s mother.[1] 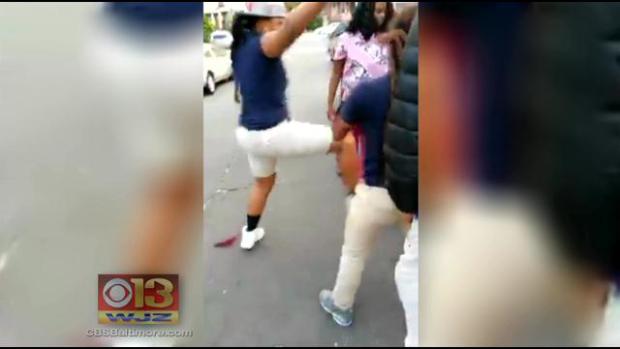 A 17-year-old is beaten and robbed by a girl gang in West Baltimore. The entire thing was caught on cell phone camera and shared repeatedly on the web. Now the victim’s mother speaks with WJZ.

The victim’s mother says she wants people to see the video so they can identify the girls who attacked her daughter.

It’s the disturbing video that’s been posted all over the Internet: a 17-year-old Baltimore County girl violently beaten and robbed by a group of girls on Tuesday.

“They punched her, they kicked her and mostly they stomped her in the head,” the victim’s mother said.

The victim’s mother, who didn’t want to be identified, says the group that attacked her daughter is part of the “Sisterhood” gang.

“I just think something really needs to be done about these gangs because every time we turn the TV on, it’s another gang after somebody else’s child,” the victim’s mother said.

You can watch the video here[3].

Two words come to mind while watching this video: Animalistic and disturbing. Clearly we need to not only crack down on gangs, but strengthen the family unit in black communities. When families care, and heavily discourage this type of behavior, we find that there are fewer social issues to contend with.