Christmas is a special time of year for many, many families and it can serve as a proper occasion to bring everybody together for important, life-changing news. When one family adopted a new baby boy, the parents did not reveal the baby right away but, instead, placed him under the tree as a Christmas miracle. Thankfully, the whole reaction by the baby’s new sisters was caught on video:[1] 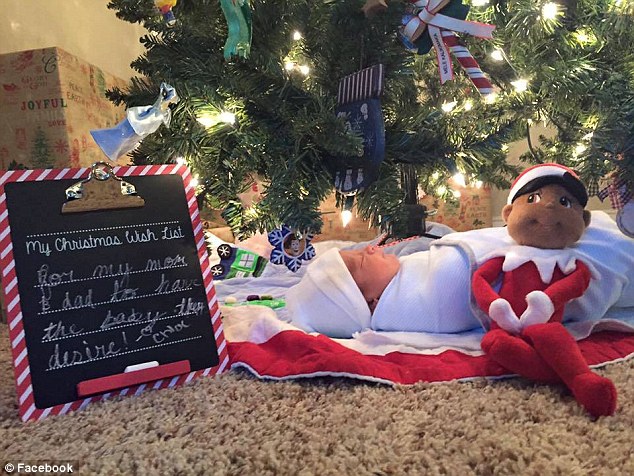 This is the priceless moment three little girls met their baby brother for the first time – and reacted in the most heartwarming way.

Courtney Solstad, 36, who lives in Dallas, Texas, made her daughters’ Christmas wishes come true when she surprised them with the perfect present under the tree – an adopted baby brother named Nathan.

And in order to ensure that the sisters, Chloe, Emma, and Maci, would remember the first moment they met their new brother for years to come, Courtney and her husband Steve captured the precious moment on camera in an emotional video clip[3], which shows the three girls bursting into tears of joy upon discovering their new sibling nestled under the tree.

Writing alongside the video, which was posted to Facebook, Courtney said: ‘The girls knew nothing about Nathan until this.

‘We met them at the door and told them that we had been out Christmas shopping and got them a gift to share… and it was under the tree!’

The minute-long clip, which has been viewed nearly 400,000 times since appearing on Facebook, shows the three girls walking into the front room in anticipation of their surprise.

The girl at the front is first to spot the baby and quickly holds her hands to her mouth in shock.

The second girl then walks straight past her – she does not appear to have spotted Nathan at this point – before stopping in her tracks suddenly and bending down for a closer look.

She then places her hands over her mouth also while the third daughter stands a long way back and does the exact same thing.

Courtney announces to her daughters: ‘That’s your new baby brother,’ as one of the girls starts to cry tears of joy.

The girl in the middle then begins jumping in excitement before the third, who has now moved closer to the baby, says: ‘I’m going to wet my pants.’

Later the girls squeal in delight as one says: ‘He is so sweet,’ and another asks: ‘Can I touch him?’

The video concludes with one of the three asking whether the baby is a boy before they each go off to wash their hands so that they can give their new brother a cuddle.

Courtney also shared an image of her new son nestled under the Christmas tree, all wrapped up in a blue blanket, while sleeping alongside an Elf on the Shelf toy.

Next to the adorable infant is a chalkboard, on which reveals that one of Courtney’s daughters, Chloe, had actually listed a newborn baby on her Christmas wish list.

Under the heading ‘My Christmas Wish List’ is written: ‘For my mom and dad to get the baby they deserve – Chloe.’

Shortly before posting the video of her daughters’ reaction to their new baby brother, Courtney shared an update on Facebook about how her family was adjusting to the new addition.

‘Feeding my little man and reflecting over the last few day’s events!’ she wrote in a sweet post.

‘This has been one of the most magical experiences in our lives! We prayed big things and God answered in big ways!

‘Our little guy is so incredibly perfect! He is healthy and happy and just the sweetest thing you have ever seen!’

She added the hashtag #Solstad6 in celebration of their expanded family.

Since Courtney shared the video on social media over the weekend, the family has been inundated with warm wishes and happy comments, with many people offering their congratulations on the new addition to their family.

‘Congratulations on the beautiful baby boy!’ one person wrote, while another added: ‘What an amazing blessing and reaction by the girls! #bestgiftever’

This is a touching video and though we do not know this family, it can bring a smile to many faces and brighten a work week as we eagerly await Christmas.

Watch the video and see what pure joy looks like…