2016 has officially been the most bizarre year of my life. Of course, I’m only 21 so it’s entirely possible that one of the upcoming years will be worse, but in reality, you can’t really beat the possibility of a Hillary Clinton Presidency and clowns terrifying young children and families in the street.

That’s not a challenge, I’m just acknowledging that you couldn’t make up most of what has happened this year if you tried. Not even Stephen King has an imagination this good. 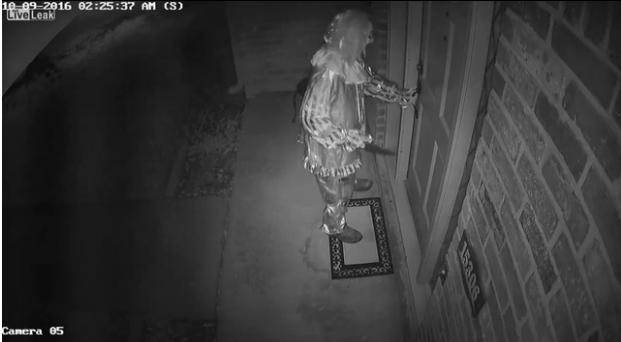 And speaking of terrifying clowns, it appears they’re doing more than just terrifying kids in parks, they’re now trying to break into homes armed with knives.

CCTV footage caught a “killer clown” attempting to enter a home through the front door. He tries the handle and then walks away when he finds it locked.

Of course, he’s not walking away because he decided that breaking into homes dressed as child’s entertainment was a bad idea (READ: illegal), but because he was going around the house to the back gate to try the doors back there.

After finding all of the doors securely locked, he leaves the premises.

The owner of the home posted the video on social media[2] the next day.

“This morning, I notice my gate was open. I checked my surveillance cameras and found someone in a clown costume was trying to get into my house.

“I’m sure we would all be dead today if he was able to get in.”

Watch the spooky video below:

Do you have a killer clown contingency plan? I can assure you that if one of these freaks tried to break into my house, it would be the last thing he ever did. There is no reason for people to do this except for to terrorize others and that’s not something that I’m willing to put up with.

We have Russia threatening us, ISIS attempting to send terrorists into our nation thanks to our inept government, $20T in national debt and a crumbling economy. The last thing we need is a group of immature punks carrying around large kitchen knives and looking for reasons to get shot.

2016, can America catch a break? You take our favorite actors and singers, and you’re replacing them with muderous clowns? Really? What did we ever do to you?