Video: Desperate Teen Girl Jumps Out of Moving Car To Get Away From Kidnapper

Admittedly, it’s a bit extreme to jump out of a moving car. But when one young lady was kidnapped, she did what she had to do to survive and it may have saved her life.[1] 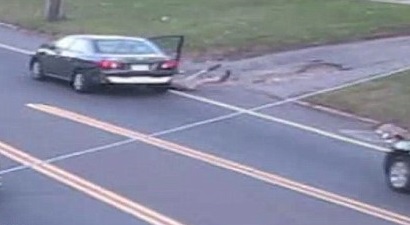 A 17-year-old girl jumped from a moving car to escape from a would-be kidnapper after being lured into the vehicle by a woman.

The youngster got into the charcoal grey Toyota in Bridgeport, Connecticut when she was assaulted by a Hispanic woman in her 40s.

Police said the woman drove around the block a couple of times looking for the teenager after she had escaped.

Bridgeport Police have released CCTV footage of the drama in an effort to help track down the driver.

The footage shows that the rear bumper of the car is missing.

Police said the car had been on Dover Street, Boston Avenue and was spotted heading towards Stratford.

ABC 7 spoke to several locals who expressed shock at the attempted abduction.

One said: ‘Maybe if it was a man trying to get her in the car, but seeing as it’s a woman, but she still don’t know who that person is.’

Another said: ‘It’s like her only resort. What else could she do, cause maybe if she didn’t bail out she’d be dead.’

The attacker is described as a hispanic woman in her 40s wearing a black leather jacket. She had freckles as well as black hair tied in a ponytail.

This is a harrowing tale, but it goes to show that quick decisions and decisive action can make the difference between life and death. If you’re abducted, don’t be a victim. Fight back!