VIDEO: Did a black man just threaten to murder white people in a NYC park? 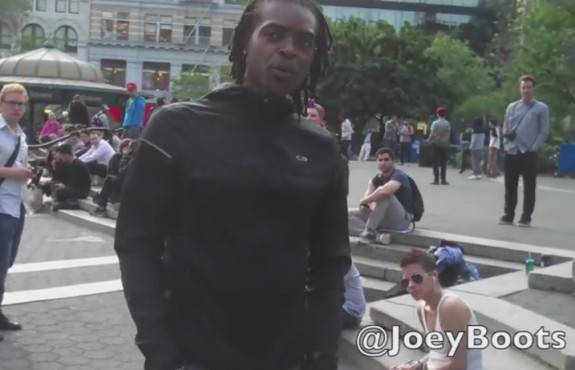 [1]Obama has stirred up race relations so much over the past few years that a lot of the rougher characters in society think it’s fashionable to create race wars. In this video, a white man, who appears to be Joey Boots, a contributor to the Howard Stern Show, is confronted by a black man who tells him he will be dead within a year allegedly because he is white.[2]

“You should bow to me… You’ll all be dead by the end of the year.”

As one black onlooker says after the outburst, “You know it’s like white supremacy, just backwards.”

Another bystander is caught on video saying, “His Irish ancestors, they’re the monkeys.” The whole melee is rather bizarre, and a lot of it must be drug or alcohol fueled. One of the guys hanging out in the park is wearing a F*** the Police T-shirt. Watch the video and decide. Was this racism or merely a bunch of intoxicated people? (warning: profanity)


This is a longer version with commentary.
Endnotes: