[VIDEO] Donald Trump: Send Illegal Immigrants Home!… You Either Have Laws Or You Don’t Have Laws.

Prominent Hillary Clinton donor (and good friend to the Clintons) Donald Trump is running for President.  He has made illegal immigration[1] the focal point of his campaign, and while there has been backlash, he’s still going full stream ahead… 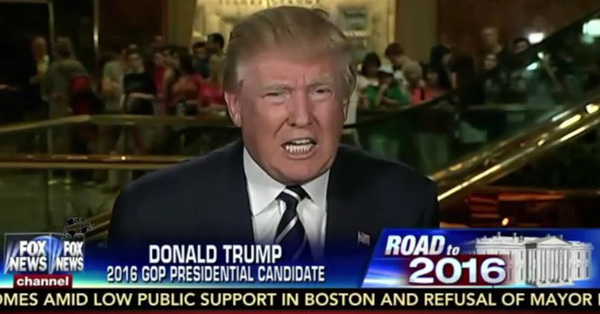 You got to build a wall. It’s not an easy thing to do. And I’ll get it done. And believe me, I’ll do it for the right but I’m also going to have Mexico pay for it. Mexico is making a fortune off of us. They will pay for it. So, just mark my word. That’s called “negotiation.” …Before I even start a wall we’d get rid of the bad ones. We have a lot of really bad apples. We have a lot of bad dudes that are causing tremendous problems… I was very proud of bringing up illegal immigration. It was not easy to do. I would get rid of the bad ones, the criminals, we have a lot of people who are here who shouldn’t be here. And, I don’t want to house them in our jails because it’s costing a fortune. I want them to go back to the country where they came from. Not only Mexico, plenty of other countries. They are pouring across the border. So that’s number one. Then there’s number two. There’s some great people. But, you either have laws or you don’t have laws. I would get them back to where they are and I would try to work out a process to where they could come in legally. But, they have to come in legally, Sean. It’s about laws.

Watch the video below. Do you think he’s right?