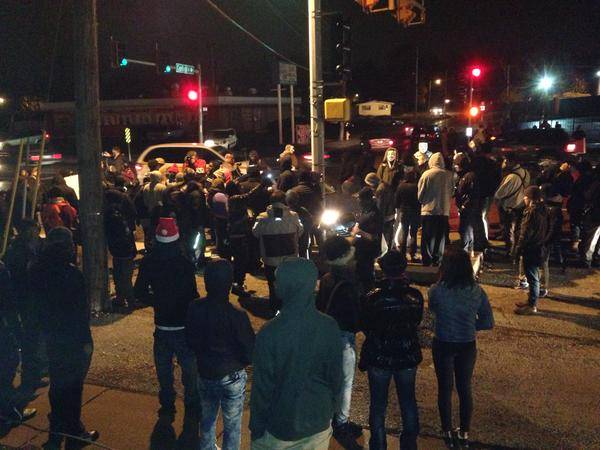 [1]The left showed its true colors in this profanity-laden video, protesting outside the Ferguson Police station in Missouri. This is the kind of crude, violent anarchist behavior that race baiters like Al Sharpton and Jesse Jackson have successfully stirred up over the years. The irony is that many of these police officers they are targeting are black or another minority.[2]

The protesters screamed, “F*ck you motherf*ckers!” and, “Honkey!” at the police officers.
…But it’s not racist when Liberal thugs do it.
(Warning on Language)

The full story on the shooting of Michael Brown by Officer Darrell Wilson has yet to come out, as the trial concludes. If anything, the evidence that has emerged since the shooting appears to fully exonerate him. Yet the race baiters don’t care about the truth, nor do they care that Wilson’s life has already been put through the wringer at this point, and the shooting will follow him around the rest of his life. They don’t care if another race riot results in the deaths of more people – whites or nonwhites – they have been drinking the Kool-Aid of Al Sharpton and Jesse Jackson for too long.

Watch the video below. At least two protesters were arrested.

Video of protester being pepper sprayed during arrest