VIDEO: Five Burglars Made The Mistake of Targeting a Very Armed ‘Ms. Dee’

When you go out with the intention of victimizing an innocent person, you are responsible for the consequences that befall you. Five burglars found that out the hard way when they decided to invade the home of “Ms. Dee,”[1] and armed resident of Detroit. 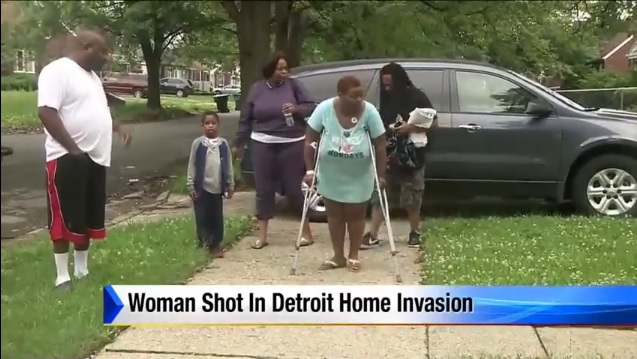 Detroit Police Chief James Craig has made a major point of saying that Detroit residents not only have the right to arm themselves, but that it helps to prevent crime when they do. And the numbers WDIV reports in this story bears him out. But that’s not at all the best part of the story – not even close. The best part would be the story of “Ms. Dee,” who packs, and wasn’t having it when five intruders (at least one of them armed) decided to invade her home and rob her.

Ms. Dee’s foot will be fine, she says. We don’t know the condition of the burglars – particularly the one she thinks was shot, but if her brother’s words mean anything they’d be wise not to try hitting this house again.

You might not realize it, but a lot of progress is being made in Detroit – and a lot of that is owed to the seriousness of Chief Craig, who wants to see the residents of the city empowered to fight back and protect themselves. The city has emerged from bankruptcy, but its financial challenges are still very real and there’s no way the city can afford a big enough police force to stop every conceivable criminal act before it’s committed.

If people have any hope of being safe in their own homes, they have to be able to protect themselves. And contrary to the narrative of gun-control liberals who would have you believe most people just end up having their own guns used against them, here is a situation in which a woman protected herself and her home because she knew what to do and she wasn’t afraid to do it.

You go, Ms. Dee. And as for the rest of Detroit, know that if you want take action to protect yourself, your police chief is a serious man who supports you in that. Detroit has a long way to go, but it’s nice to finally see some good things happening.

I’m glad she didn’t suffer any further injury. This is why it’s important to be armed, people. Take note.