All illegal immigrants are criminals. Every. Single. One. No, that doesn’t make each and every one of them bad and it certainly doesn’t mean that every single one are violent or pose grave dangers to our society; what it means is that those who came here in violation of our laws have, in fact, broken our laws and such circumvention of the legitimate immigration process indicates a low regard for our laws and customs. A recent report from AZ Central[1] details the criminality of a man who has been deported a whopping 20 times: 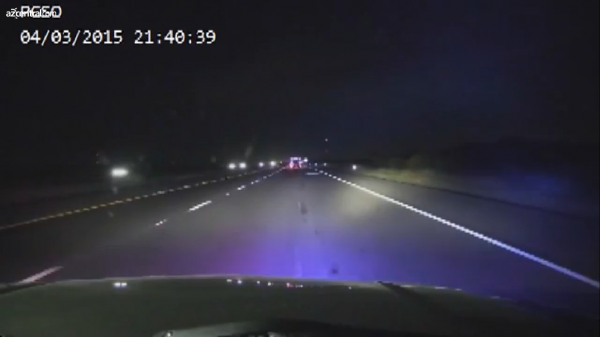 A man that Pinal County authorities say has been deported 20 times allegedly led deputies on a high speed chase Friday night on westbound Interstate 10 near Chandler.

The pursuit lasted 23 minutes and covered 30 miles. The Dodge Caravan that deputies were after weaved in and out of traffic, split lanes of traffic and at times hit speeds over 100 mph. The driver finally got off the freeway on I-10 at Riggs Road.

The driver then rammed a barricade arm at the Sun lakes Community causing $20,000 in damage. The driver continued speeding through the community eventually stopping. The driver and three passengers ran from the SUV.

The driver was caught after a short foot pursuit and was later identified by his Mexico driver’s license as Genaro Cisneros-Delgado, 26, of Phoenix. The other three individuals who ran were also caught. All three admitted they were in the United States illegally. All three were turned over to the U.S. Border Patrol for processing.

Genaro was booked into the Pinal County Jail for felony flight and endangerment. He is currently being held on a $50,000 bond. The Maricopa County Sheriff’s Office took the criminal damage investigation related to the damaged gate and additional charges are pending.

Pinal County Sheriff Paul Babeu said, “Genaro Cisneros-Delgado told deputies that he has been deported over 20 times after entering the United States illegally and being caught. He told a deputy this was the second time he has smuggled illegals and was doing so to earn money.”

In many other countries, the penalty for disobeying immigration laws are significantly more severe than simply being offered a friendly ride back across the border to allow one to flout the law once again. Maybe such penalties would help keep things like this from happening.