ISIS is not merely a group of fundamentalist Muslims; they are sick, twisted savages that do not even qualify as human beings. 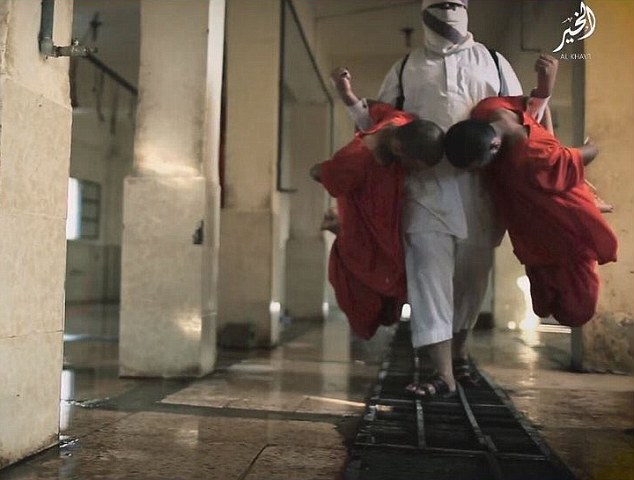 As human beings, we should feel free to believe in any God(s) we wish – or no God at all. Call him Yahweh, God, Allah or fictitious – but killing those who do not fall in direct line with one’s religious beliefs has been occurring for far too long and here in the 21st century, we are still dealing with intolerant zealots who torture and murder in the name of a religion that the left asserts is a “religion of peace.”

ISIS has burned, beheaded and murdered supposed infidels in a number of gruesome ways. Now, according to a recent video, the savages are hanging people up and butchering them.

The video[2], named ‘The Making of Illusion’ was released to celebrate the Muslim holy time of Eid al-Adha and it includes footage of having alleged U.S. spies hung up and their throats slit.

The gruesome video shows an executioner carrying two prisoners – one on each arm – and slitting their throats over a grate. They are then hung upside down. The video also includes footage of past executions and past terrorist attacks carried-out by ISIS.

Not all Muslims are heinous killers who murder in the name of Allah. However, too many Western nations continue to ignore the very real jihad being waged and whether we like it or not, we are in the midst of a holy war initiated by fanatics that are recruiting and gaining strength through our collective inaction.

The video can be seen here.[3] Warning: it is extremely graphic.