A video posted on social media this weekend shows an Israeli man placing what he claimed were pieces of raw pork on the body of a Palestinian terrorist who had moments before stabbed an Israeli policeman. He had also had something to say about it…THIS is how it went down![1] 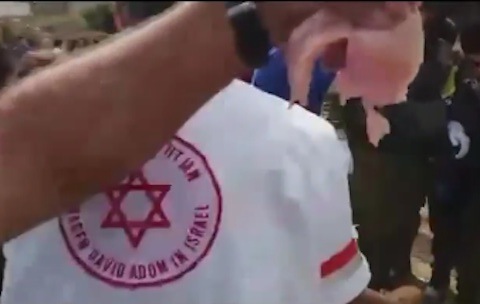 The Palestinian was shot and killed after stabbing the police officer on Friday in Kiryat Arba, a Jewish settlement near the West Bank city of Hebron.

In the video which started circulating on Israeli social media Saturday night, the Israeli resident of Kiryat Arba displays for the camera what he claimed was pig’s meat, forbidden for consumption in both the Jewish and Muslim faiths.

He walks up to the terrorist, spread on a stretcher and being treated by an Israeli medical team, and places the raw meat on the man’s head, torso and underwear in a move clearly designed to grab attention.

“Guys, this is pork,” the unidentified Israeli man claimed to the camera. “Who doesn’t know they really love pork.”

“Let him enjoy himself with the virgins. He should enjoy his virgins with the pork,” he added, referring to the reward of 72 virgins that Muslim terrorists are promised they will receive in paradise after their death.

This is a man who had just stabbed a Police Officer in an alledged terrorist attack…you can see how it upset the people, and rightly so. The incidents come amid an increase in violence in recent days between the Israeli people and Palestinians. Just last Thursday, Palestinian gunmen shot and killed an Israeli couple as they drove with their four young children in the West Bank.

Upset Israeli man is seen on video placing what he said was raw pork on the dying Palestinian who stabbed a Police Officer.