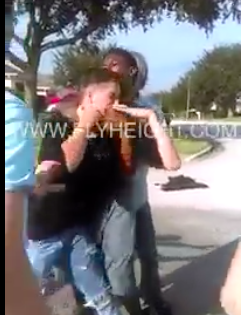 This video was hard to watch.

First, you can tell that the kids on this video were all egging the fight[2] on hoping it would happen. One even has his phone out recording the entire ordeal, obviously expecting a conflict to occur and hoping to catch it on camera. He does not try to calm both sides down, he just pushes the two further and further until the inevitable happens.

The video starts with a young man being pushed around by another young man. He is obviously frustrated and angry, but keeps trying to avoid the antagonist. He tries walking away, but the other boy seems to stalk him. He will not let him go and is right on his back breathing down his neck.

The poor boy just keeps trying to get away, but cannot seem to shake the other boy. He is obviously just pushing him and trying to get him to fight back. Meanwhile a large group of other boys follow the action adding to the frustration of the boy being followed. You can tell he is trying to stay calm, but then he loses it.

He finally snaps and turns on the boy who was previously the antagonistic bully. It takes barely any time at all for the boy to get the bully down on the ground. Meanwhile the other young men are screaming and cheering on the fight. You can tell they have gotten exactly what they wanted in the fight. But it turns gruesome quickly when the bully is not as tough as he looked and cannot fend the other boy off.

Finally the neighborhood resident pulls the two apart. You can tell both boys are still fuming though. Luckily it was not worse before the man intervened because they were both out for blood and they were not stopping anytime soon.