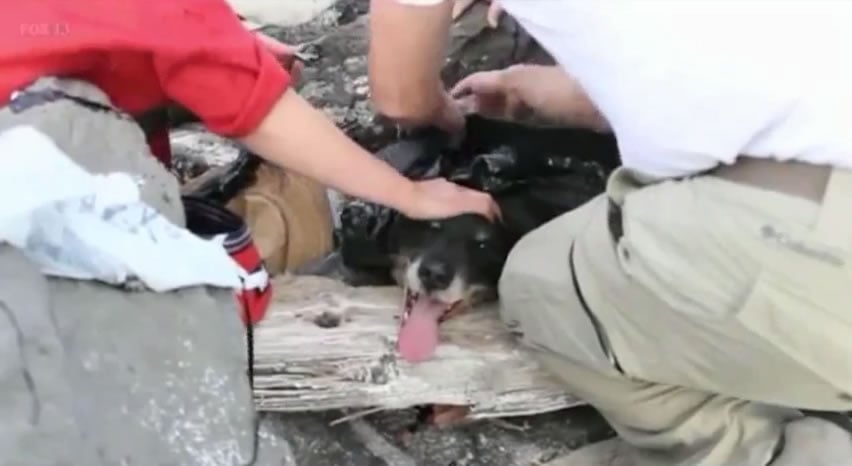 Dog owner Tom George thought his dog was a goner when he slipped into a tar pit near the Great Salt Lake’s Spiral Jetty. He had no cell phone service and could think of nothing to do except drive to the nearest town, an hour away. Buried up to her neck, George figured his dog would not last an hour, and would need to be euthanized or tranquilized before being lifted from the tar. Amazingly, stranger after stranger who stopped by to visit the famous earthwork sculpture, beginning with the McGregor family, jumped in to try and save the dog.[2]

The Daily Mail covered the story,

And at first the situation looked ‘pretty hopeless’, according to Max McGregor, whose family stayed with the dog.

‘I was pretty sure that the back legs, the way they were positioned, they were going to snap right where the knee was,’ said McGregor’s daughter Chloe. 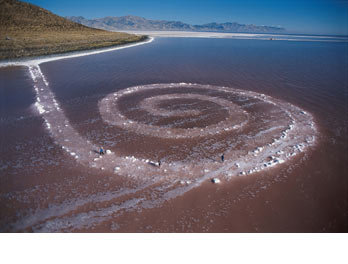 [3]Todd Tanner, a Fox 13 reporter who was supposed to shoot video of the Spiral Jetty that day, said only Shelby’s head was visible from the pit. He thought the dog was dying.

But then a family who was visiting the shoreline with a photography group came over to help. And a huge group of friends from Salt Lake City jumped in as well.

Max McGregor said that as they separated the dog from the tar piece by piece, they would continue putting objects in the pit to keep Shelby from getting stuck again or continuing to sink.

According to Tanner, no one in the newly-formed group ‘knew exactly what to do’, but they worked for over an hour together to find a way to get Shelby out.

‘Total strangers talked, and worked, shoulder to shoulder, and figured it out,’ he wrote in an exclusive for Fox 13 Salt Lake City.

‘They didn’t know each other’s names, and they didn’t care. They ruined their clothes, they interrupted their plans, and they made a memory to last a lifetime. And yes, they saved Shelby.’

Shelby still couldn’t move after he was freed from the pit, so five people helped carry him to the road and saw that George had come back just in time.

Veterinarians worked on Shelby afterwards for six to eight hours to remove 40 pounds of tar, shaving off most of his hair. The most incredible part about it is the dog never appeared to complain, based on looking at all the photos. Watch the video below, where one kind stranger explains she finally started digging with her bare hands. It really restores your faith in humanity; despite all the suffering going on, with everyone broke due to the economy, these strangers still took time out of their obligations to save this poor dog. The owner is also a kind man, adopting Shelby when he was 10 years old from an animal shelter. A Go Fund Me account[4] has been set up to pay for Shelby’s bills, and any extra money raised will go to help a local group that helps animals like Shelby.