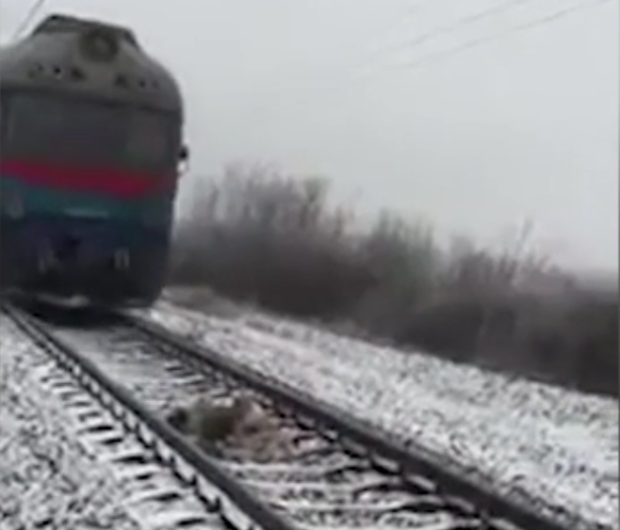 This is exactly what every dog lover needs to read. And if you know someone who loves dogs[2] then this is going to melt their hearts.

Two dogs were abandoned in Ukraine. The dogs, a female and male, were cold and alone. And they were also injured. The female was injured on a set of train tracks and was unable to move from her spot. The outcome seems obvious and tragic. But thanks to the help of the male dog, both dogs were able to survive the dangers of the trains.

A woman was told of the dogs near the tracks and went to see if she could help them. That is when she witnessed something truly remarkable.

The woman said of the experience:

I got a phone call from a friend who said that there were two dogs lying on the railway track near Tseglovka village for two days.

When we arrived, it turned out that one of the dogs, the female, was injured and couldn’t move.

I saw a train approaching – and felt sick. The male dog heard the sound of the approaching train, came close to the female dog and laid down next to her.

Both of them pushed their heads towards the ground, and let the train pass.

The male dog was doing this for two days in a row. I don’t know what to call this: instinct, love, friendship, loyalty?
One thing I know for sure, not all the people would do the same as this.

She is right. These dogs did what many humans would not be willing to do. It is just one more example that we can learn from the wonderful animals around us.