Is this a violation of the first amendment? A man is left confused and frustrated after he feels he was denied a job based on his tattoos. [1] 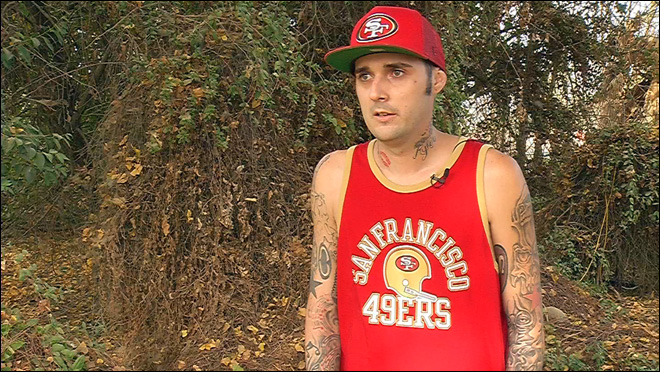 A man is left confused and frustrated after he feels he was denied a job based on his tattoos.

Bill Roach reached out to Eyewitness News because he thinks he was a victim of discrimination and was treated unfairly.

He said the tattoos aren’t gang related and shouldn’t be an issue. He’s proud of them, and they all mean something to him.

“My right arm is nothing but music,” he said. “You know, songs.”

Some mean more than others. He has the lip prints of his wife on his neck, plus a tribute to his first-born son, Ryker.

“So, my neck is the footprint from when he was born, his name, and his birth date,” said Roach.

Now those tattoos mean something else entirely – difficulty in finding a job.

He recently applied for a position in the medical industry, and even though he passed a test, he didn’t get called back for a first interview.

Eyewitness News isn’t naming the company, because it didn’t break any laws. But, we did reach out to the company officials. They said they can’t comment because it’s “a personnel matter.”

“We know that every action or choice has a consequence,” said Holly Culhane of PAS Associates, a human resources consulting company.

She said it’s a problem employees have all the time, but there’s a difference between legal and illegal discrimination.

“There are certain areas that you cannot discriminate based on,” said Culhane. “So, we’re talking about race, color, religion, sex, national origin, as example of those.”

That’s why she said employers should make their practices clear.

But, Roach said that’s exactly what he did and was told by a manager that it wouldn’t be a problem.

“I pulled my stuff up, and I showed them I had tattoos,” said Roach, “and I wanted to be up front, because to avoid wasting my time as well as theirs … and he encouraged me to take the test and said, you know, don’t worry about it.”

He said he’s never had a problem with his tattoos before and is well qualified and deserves a shot. He said he wouldn’t have been upset if they told him up front. Instead he had to take a day off work and now feels like his time and money were wasted.

“If I have a family member that’s sick or dying, I don’t care if the person’s (working in the medical job) got tattoos,” he said. “If they’re there to help my family member and here to save their life, I think the last thing going through someone’s mind when they’re going through an emergency is that I have tattoos. I’m sure they’re more concerned about, ‘Help my loved one.’”

Roach said he is writing a letter to Congress, seeking to make tattoo discrimination illegal unless they are hateful or gang related.

As tattoos become more and more prevalent in society, we need to decide if this issue is covered under a 1st amendment or should it be left up to the employer. You decide…..