After watching this video (below) of abuse to this poor puppy [1]I’m thinking someone needs to throw this cruel man over a fence. 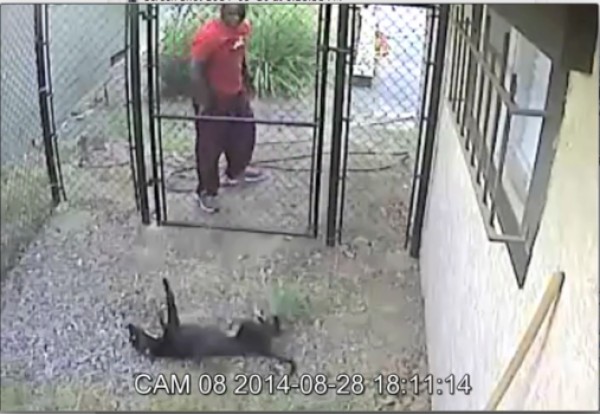 According to Monday’s NBC San Diego News, a man who was captured in a Ramona, California, surveillance video, cruelly throwing a puppy over a fence, is wanted for questioning by the authorities.

The incident took place outside of the Investigative Science and Engineering, Inc., commercial building on D Street on August 28. The business’ vice president, Karen Tavares, described what the man was doing prior to the actual throwing of the pup over the fencing:

Though the act was cruel, things could have been much worse if not for Tavares’ visit to work over the holiday weekend…at the time that the pup was dumped, the outside temperature was in the 90s and there would have been no food or water available to the pup for several days.

Because Tavares came to the building, the pup was discovered before the outside temperature could take a deadly toll. San Diego County Department of Animal Services took possession of the puppy, who was said to be okay despite being dropped over the fence.

The puppy is currently available for adoption at the Carlsbad animal shelter.