VIDEO: Michelle Obama Supporters Flip-Flop When Asked Whether Her School Lunch Standards Should Be Applied to Food Stamps

Dan Joseph attended the recent Congressional Black Caucus conference to ask Michelle Obama supporters whether the same coercive standards that the First Lady is trying to impose on America’s school children, should be applied for other government programs[1], such as food stamps, EBT, SNAP, etc. The responses though hypocritical are not surprising. 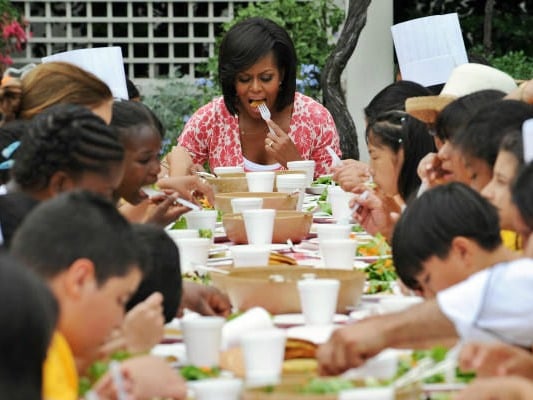 Joseph asks several attendees if they support Michelle Obama, which they admit they do. Then he asks if they support her “healthy” school lunch initiative. Again, they answer affirmatively. But when Joseph asks whether the program Michelle Obama has dedicated her time as the nation’s First Lady to implementing should be applied to government welfare programs, her supporters start singing a different tune.

“I think it’s a good idea, however, the food manufactured for the children is not very good,” says one supporter when asked by Joseph whether she approves of Mrs. Obama’s school lunch program. “The food is like cardboard,” explained the candid lady.

These comments could apply to almost any government program, supposedly well-intended, but poorly implemented, because big government can’t effectively and inefficiently run anything as well as the private sector, because they are not given the signals that a free market system provides, the “carrot” of profit and the the “stick” of bankruptcy.

“The families have to eat healthy too, so wouldn’t it be a good idea to say here are the things you can buy; here’s all of the healthy foods, and you can use the food stamps below, but not for other things,” Joseph asked another Michelle Obama supporter. “No Oreos, no Doritos, no sugar…,” Joseph inquires.

“No, I don’t think that would be doable,” she answers.

This VIDEO below is a perfect example of the common sense deficit within the Democrat party, especially the woman who said “I don’t think that’s the governments job to dictate what I can and cannot eat”. Because her party is TOTALLY not giving government power to tell people what they can and can’t eat.*sarcasm noted