VIDEO: Moment Brave Shoppers Take On Armed Robber Who Threatened To Shoot Them – And Won 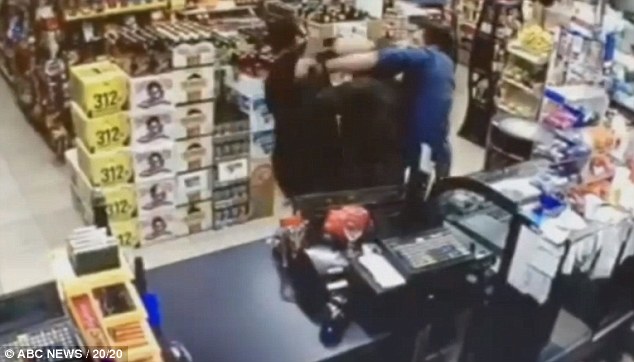 This is the moment two brave customers tackled a gunman during an armed robbery at a Florida convenience store.

The pair had been shopping at the store in Coral Gables when the gunman burst in at around 4.30am and ordered them to get on their knees and hand over their wallets or ‘he would shoot them,’ police say.

But the brave shoppers ignored the demands and tackled the gunman to the floor until the police arrived.

Jovon Reddick, 32, was arrested after the incident and charged with armed robbery and possessing a weapon while committing an offense, ABC News[3] reported.

Officers say they found he had a fully loaded handgun on him during the robbery.

Surveillance footage from the store shows the moment Reddick walked in and confronted the two men, whose identities have not been revealed.

Officer Lauren Poole, of the Coral Gables Police Department, said that Reddick ordered the men to: ‘Get on the ground empty your pockets or I’ll shoot you.’

One of the men instantly reacted by walking towards the armed robber and confronting him.

His friend joined him and the pair grappled with the gunman as they tried to overcome him.

One of the men was seen using a bottle of iced tea to hit the man as they wrestled around the store until they were able to tackle him to the ground.

In his police booking shot, Reddick is still bleeding from the blow from the bottle.

Officer Poole, of the Coral Gables Police Department, said the pair’s brave actions only seemed to sink in after police arrived and found the loaded handgun.

The men were seen hugging each on the video in shock.

While Poole praised the customers, she said police did not advise members of the public fighting back during an armed robbery.

‘We don’t condone people not to comply to some of these types of demands in these situations,’ she told ABC News. ‘We are fortunate that it didn’t turn into a tragic situation.’

After police arrived, Reddick claimed he was ‘just joking’ and had kept the gun in his pocket, according the arrest report.

In such a situation, the best way to walk-away unscathed is to comply. However, there is a certain satisfaction whenever a cowardly gunman fails in his attempt to force people into fear.

These men are heroes.