(Video) Netanyahu: Iranian Nuclear Deal Even Worse Than We Thought

A lot of people have been reporting that the White House’s nuclear deal is bad.  Recently re-elected Israeli Prime Minister Benjamin Netanyahu told his cabinet that it’s even worse than originally thought.[1] 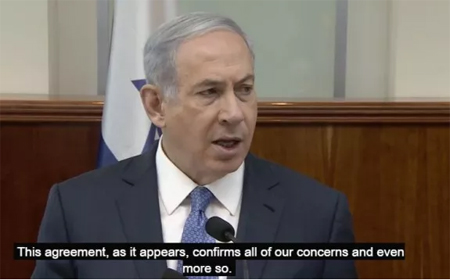 “This deal, as it appears to be emerging, bears out all of our fears, and even more than that,” Netanyahu told his cabinet in Jerusalem as the United States, five other world powers and Iran worked toward a March 31 deadline in Lausanne, Switzerland.

Noting advances made by Iranian-allied forces in Yemen and other Arab countries, Netanyahu accused the Islamic republic of trying to “conquer the entire Middle East” while moving toward nuclearization.

“The Iran-Lausanne-Yemen axis is very dangerous to humanity, and must be stopped,” he said.

The video is embedded below.  Exit question, is there anyone who thinks the Iran deal is a good idea besides President Obama?