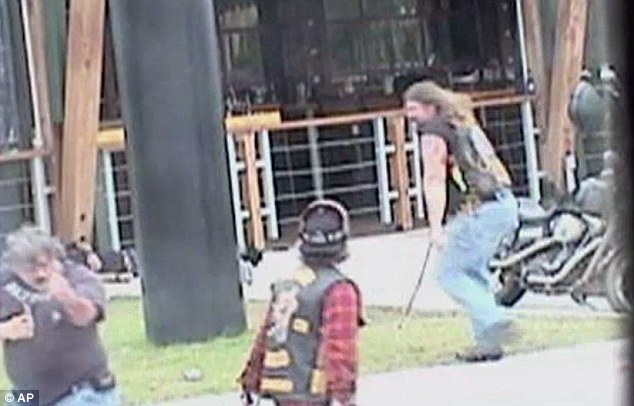 [1]Occasionally, violent biker fights break out, and it’s the cops’ job to figure out who is right and who is wrong and break things up. It’s not always easy.[2]

The Daily Mail reports about a recent incident in Texas,

New footage of a melee between rival biker gangs outside a Texas restaurant show the chaos that ensued as participants were shot, punched and beaten with chains.

Police dashboard video shows a tight group gathered in front of the Twin Peaks patio before the brawl breaks out, wreaking havoc outside the Waco restaurant.

Several bikers duck for cover as Richard ‘Bear’ Kirschner – who has been identified as a member of the Cossacks – is seen striking others with a chain, swinging it wildly over his head.

Twenty seconds later, Kirschner is shot in the leg and the hip, staining the grass with blood – he was struck by the same caliber of rifle fired by Waco police.

One Cossack told police the Bandidos had been trying to force his group to join the confederation of clubs in order to profit from $30 per month in dues each biker paid, and that this caused the animosity leading to the shootout.

In a separate interview, a Bandido who was shot in the leg claimed the Cossacks had long refused membership in the confederation.

He denied that membership or dues were being forced on anyone.

Watch the video below. It will just reinforce your opinion that if you are going to join a biker gang, you better choose one that has a good association, such as a Christian association.