Nicolas Cage is not often looked upon as a calm voice of reason. The actor went bankrupt in spectacular fashion and has made some questionable career choices in what movies he will make. However, when his friend, Mötley Crüe frontman Vince Neil, flipped-out at a Vegas casino, it was Cage who came to the rescue to restore sanity to the situation.[1] 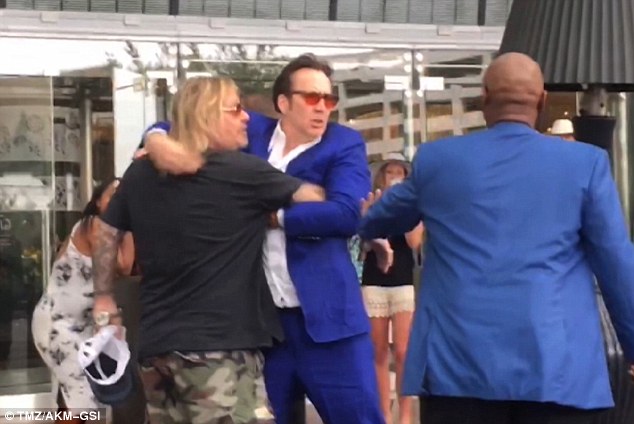 Nicolas Cage and Vince Neil got into a physical fight in Las Vegas on Thursday evening.

The 52-year-old Face/Off star and the 55-year-old Mötley Crüe singer were seen shoving each other outside the Aria Resort & Casino at approximately 5 pm.

According to TMZ[3], the rocker had just assaulted a woman inside the hotel, grabbing her hair and pulling her to the ground, and the actor was trying to calm down his friend outside.

Cage looked put together in a blue suit, but Neil appeared disheveled in a sloppy black T-shirt and camouflage cargo shorts. He also looked unsteady and confused.

Stop this sh** now,’ the Moonstruck alum was heard screaming at the former heavy metal musician

Cage then grabbed Vince and tried to put him in a lock to physically restrain him. Nicolas then soothed the headbanger, saying, ‘You’re OK, I love you.’

Bystanders stood around taking photos and a man who appeared to be a security officer attempted to diffuse the situation.

A rep for Nicolas has not returned calls to DailyMail.com

According to TMZ, Vince allegedly attacked a woman in the upscale hotel and the singer is ‘now the subject of a criminal investigation.’

Law enforcement sources told the site ‘the fight went down at around 5 PM at Aria Hotel on the Vegas strip.’

It was added that the movie star and the rock icon were together inside Aria ‘when a woman came up to Nic and asked for an autograph.’

Vince then allegedly ‘got behind the woman, grabbed her by the hair and pulled her to the ground.’

That is when Cage took Neil outside and argued with him.

In the clip shared by TMZ, the two men were seen at the end of the fight.

Though police are not seen in the video, the site claimed that Vince was ‘cited for battery and never taken to the station.’

Neil has a long history with the law.

In 1984 he got into a car accident, killing passenger Nicholas ‘Razzle’ Dingley, a drummer with Hanoi Rocks. He also hurt two occupants of another car – one suffered brain damage.

Neil was charged with vehicular manslaughter and driving under the influence of alcohol in connection with the crash. His blood alcohol level was 0.17.

In 1986, Neil was sentenced to 30 days in jail by the Los Angeles County Superior Court. He was also handed a $2.6 million in restitution to the victims of the crash and 200 hours of community service.

Neil got out of jail in 15 days for good behavior.

Neil was arrested in 2002 for punching record producer Michael Schuman in a nightclub parking lot.

In 2003, Neil was arrested again after accusations that he assaulted a sex worker at the Moonlight BunnyRanch by grabbing her around the throat and throwing her against a wall. In 2004, an arrest warrant for misdemeanor assault was issued for Neil after a fight during a show where he left a soundman unconscious for 45 minutes.

In 2011, Neil was charged with battery and disorderly conduct after an altercation with ex-girlfriend, Alicia Jacobs.

This is alarming but not altogether surprising. Neil has a sordid history with drugs and alcohol and such a long history of partying has probably left the rocker less-than-stable.

It’s embarrassing to be caught brawling outside a casino, but thankfully, Cage was there to step-in and was unafraid of confronting his violent friend.