VIDEO: Officer Saves ‘Drunk’ Driver By Pulling Him To Safety Moments Before A Train Slammed Into His Car

The left’s professional race hustlers have orchestrated a war against police. Like every profession, there are some bad apples, but for the most part, police put their lives on the line to protect and serve communities who have demonized them more and more in recent months. A new video[1], however, shows two cops acting truly heroic. 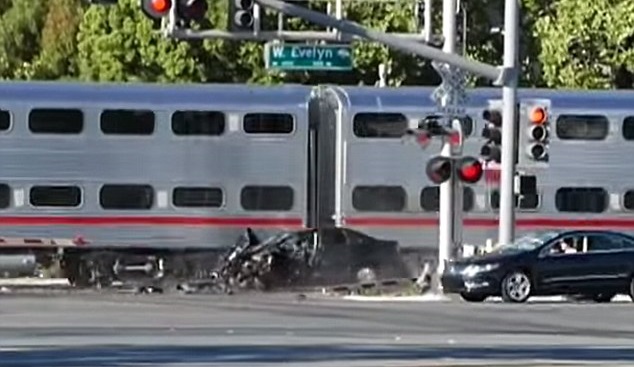 The terrifying moment a driver was pulled to safety moments before a train slammed into his car has been caught on camera.

A sheriff’s deputy dragged the motorist from the vehicle after it got stuck on the tracks in Sunnyvale, Northern California, on Monday night, while another officer flagged the Caltrain commuter service down.

The cop and the unidentified man, who police say was drunk, are seen running away from the vehicle as the conductor of starts sounding the horn.

They make it to an adjacent road into oncoming traffic, but the man then falls onto the tarmac, forcing the officer to drag him along the floor.

Just seconds later the train smashes into the front of the car.

San Mateo County Sheriff’s spokesman Salvador Zuno told NBC Bay Area[3]: ‘If it had not been for the deputies being at the right place at the right time, the driver would have been significantly injured.

He added: ‘I believe because of their actions this person is alive today.’

Zuno said deputies Lance Whitted and Erik Rueppel were just a few cars away when they saw the vehicle had collided into the crossing guard.

They ran to the collision and found major front-end damage to the vehicle and that a train was approaching the area.

One of the deputies ran on the tracks to notify the incoming train, while the other driver removed the driver from the vehicle.

Caltrain, the operators of the train, also tweeted their thanks to the department. They wrote:

‘Big shout out to [San Mateo County Sheriff’s] deputies on scene who were able to pull the driver from the vehicle, preventing a possible tragedy.

We should welcome a discussion about how to better police our communities. However, the left’s rampant “all police are brutes and racists” narrative simply has to stop.