Hillary Clinton is a politician who remains thoroughly incapable of coming-off as polished. She recites her same, tired talking points which are ever-changing and often at-odds with previous statements and when tossed a curveball, she goes to pieces. One of her notable public speaking traits is her coughing fits; for some reason, the presidential candidate can’t seem to say “Good Morning” without hacking-up a lung. The below video captures one of her usual fits:[1] 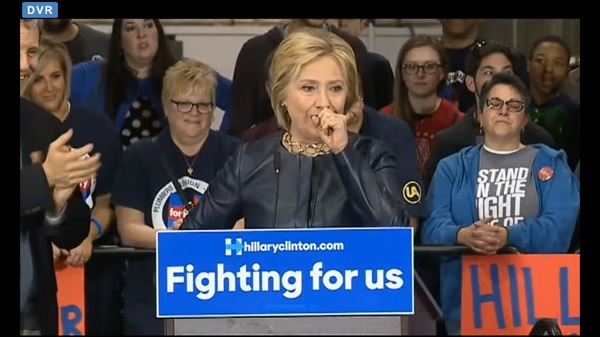 Hillary Clinton has been constantly prone[3] to coughing fits on the campaign trai[4]l, and she was hit by another one Saturday in Ohio.

“Yeah, I could use some water,” Clinton said, as she once again started hacking away during a speech. “Water would be good. I’ve been talking for days.”

Sen. Sherrod Brown (D., Ohio) was kind enough to provide her with a glass.

It’s no sign of weakness of poor character to be prone to coughing; however, one would think that given the disruption to her speech’s momentum, she would be popping lozenges or something to keep her speaking voice going.

Hell, even Marco Rubio took a break for a drink of water rather than go hoarse or cough.