VIDEO: Peruvian men flip out when they discover the women they are sexually harassing are their moms in disguise 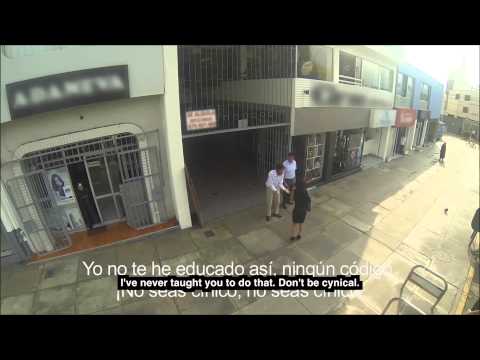 [1]Some extremely creative people in Peru created a Public Service Announcement to alert people to the problem of men harassing women in the streets, and it is hilarious. They found the mothers of some of the worst harassers, and made them up to look so beautiful they weren’t immediately recognizable. They are shown in the video walking by their sons as their sons call out crude sexual remarks at them.[2]

Addicting Info reports what happens next,

The mother then turns around and walks up to her son. The realization that he just catcalled his own mother dawns on him as he says, “Mama?”

She then wails on him. She says:

“What’s the matter with you Renzo? What they told me about you is true.”

The man then tries to desperately rationalize the awful thing he did to his mother telling her that it is, “just a game.”

The folks producing the video provide amusing commentary in the background, including, “All of Peru is watching this.” One of the male harassers pleads with his mom to stop complaining or he will get caught by his boss and lose his job, but she will not stop going off on him. Considering seven out of 10 women in Peru are sexually harassed in the streets, this PSA is brilliant. Spread it wide and far.