VIDEO: Protesters block traffic and threaten man in truck….so he drives through them

As many of you know, Monday was Columbus Day, but not everyone likes Christopher Columbus. In fact, some people would go out of their way to stage a protest in the country he discovered, because he discovered it. If that doesn’t make sense, just know that it doesn’t have to for liberals to make it an issue. 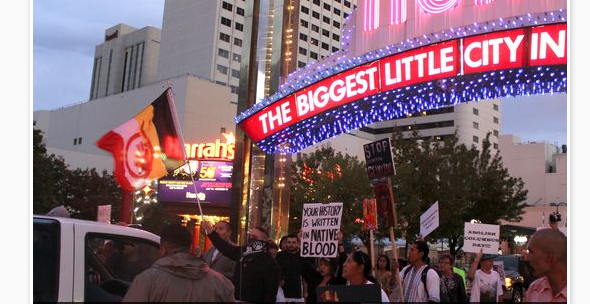 An 18 year-old man in a white Nissan was stopped by a group of protesters complaining about Christopher Columbus and how Columbus Day should be abolished because of genocide or something.

They began thumping on his vehicle, so he sped away pushing through 5 people and sending 59 year-old Kitty Colbert to the hospital in “serious” condition.

Here’s a bit of advice: don’t wanna get run over? Don’t stand in front of a vehicle! I can’t believe I have to say that to a woman almost triple my age, but I guess not everyone can be blessed with basic common sense.

Yes, there are ugly people in the world, like those who stand in front of a car and then complain when they get run over.

Watch the video below, and determine for yourself what happened and who here is at fault.