The left is constantly trying to sanitize the issue of abortion. By trying to frame it as a women’s rights issue or a healthcare issue, they conspicuously dodge the underlying fact that abortion stops a beating heart. Recently, according to a report from the Gateway Pundit[1], DNC Chair Debbie Wasserman Schultz has declared her support not only for abortion, but for late-term abortion which includes, essentially, a dismemberment of the unborn child. 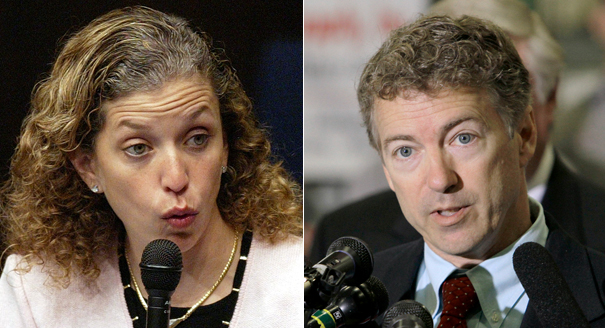 DNC Chairman Debbie Wasserman Schultz officially threw her support behind late-term abortion. The procedure includes stabbing a nearly born baby in the head and sucking its brains out.

In late term abortions[3] the fetus is rotated until it is facing feet downwards. The surgeon reaches into the uterus and pulls the fetus’ body, with the exception of its head, out of the woman’s body. Surgical scissors are inserted into the base of the fetal skull, and withdrawn. A suction tube is inserted and the fetus’ brains are removed through aspiration.

Democratic National Committee chair Debbie Wasserman Schultz responded to a challenge from Republican presidential candidate Rand Paul today to answer the question of whether or not she would support aborting a 7-pound unborn baby.

“Here’s the deal—we always seen to have the debate waaaaay over here on what are the exact details of exemptions, or when it starts,” said Paul, waving his hands to the left. “Why don’t we ask the DNC: Is it okay to kill a seven-pound baby in the uterus? You go back and you ask Debbie Wasserman Schultz if she’s OK with killing a seven-pound baby that is not born yet. Ask her when life begins, and you ask Debbie when it’s okay to protect life. When you get an answer from Debbie, get back to me.”

Wasserman Schultz responded, making it clear she wants no limits from government on aborting babies up to birth:

“Here’s an answer,” said Schultz. “I support letting women and their doctors make this decision without government getting involved. Period. End of story. Now your turn, Senator Paul. We know you want to allow government officials like yourself to make this decision for women — but do you stand by your opposition to any exceptions, even when it comes to rape, incest, or life of the mother? Or do we just have different definitions of ‘personal liberty’? And I’d appreciate it if you could respond without ’shushing’ me.”

A pro-life women’s group, the Susan B. Anthony List, says Paul is right on.