VIDEO: Retired couple flee their home after massive 26 ft watery sinkhole opens up in their back yard

I don’t know about you, but walking out to this in my backyard would seriously scare the crud out of me. The couple whom the house belonged to, were reportedly made aware of the water-filled chasm by a neighbor[1] who had the audacity to tell them… 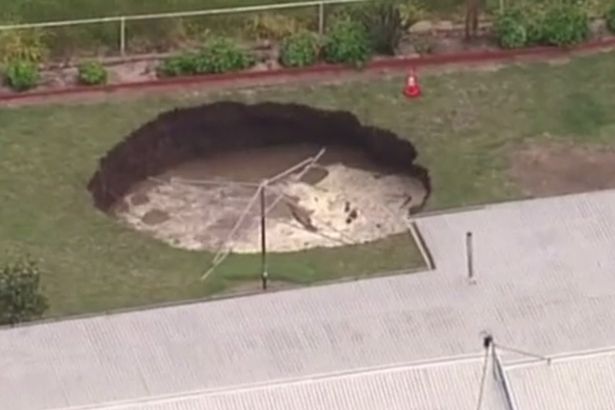 “The good news is you’ve got a swimming pool.”

An Australian couple have been evacuated from their home after an enormous 26ft sinkhole opened up in their back garden.

Ray and Lynn McKay were forced out of their house in Ipswich, west of Brisbane, when a neighbour discovered the chasm opening up this morning.

At first the sinkhole was only a metre wide, but has now collapsed into a yawning 8m chasm full of swirling brown water.

Aerial footage shows the huge pit swallowing up even more earth, as the water crashes around and further corrodes the soil.

Ray told television reporters that the neighbour was out watering his tomato plants when he saw sinkhole opening up.

According to Ray, the neighbour said: “Do you want the good news or the bad news?

Check out this incredible footage!

Wow, I can’t even imagine. That raging water is terrifying! The only thing I’d be thinking is what is lurking in that water!?