Nothing will stop this woman. This shocking footage of a 31-year-old woman in Angarsk, Russia, shows her causing serious damage to her ex-husband’s car.[1] 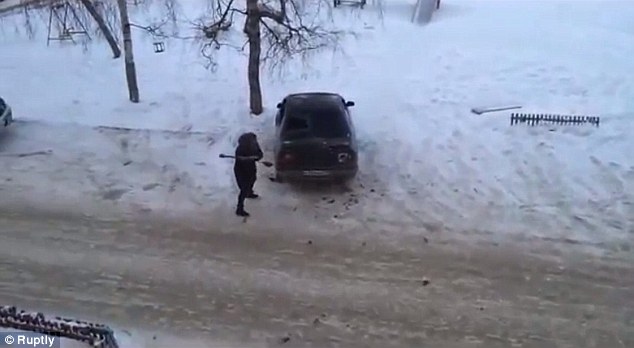 Talk about a jilted ex-lover. This shocking footage of a 31-year-old woman in Angarsk, Russia, shows her causing serious damage to her ex-husband’s car.
Despite the frigid weather in south-eastern Siberia, the woman went outside in the snow with an axe and began to smash up her ex-husband’s parked Toyota Camry.
The incident took place on January 27 as bystanders looked on nervously.
The axe-wielding woman hacked away at the bonnet and front windscreen first, before moving round to the back.
There, she destroyed the back window and rear lights.
At one point, the enraged woman approached a group of onlookers.
They, naturally, retreated immediately upon seeing her weapon of choice.
The woman then returned her attention to her ex-husband’s vehicle, unleashing even more damage before walking away.
It is unclear why the woman attacked her former lover’s vehicle.

Take Away: Never mess with a MAD Russian woman. I think this guy learned that the hard way.