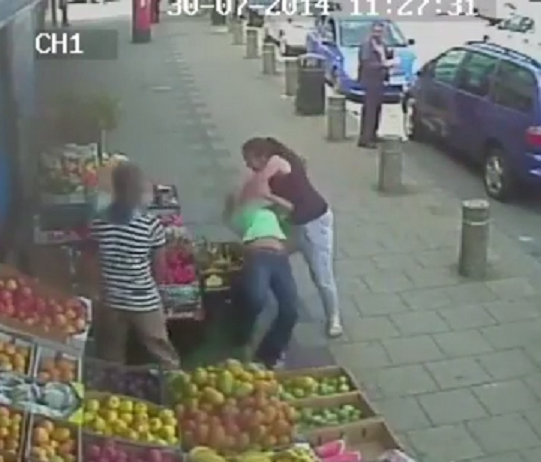 [1]Last week, police released the video of a vicious attack on a woman in Birmingham, UK, that occurred earlier this year. The 44-year old female victim had asked the thug, a woman in her early 20s, to move her Volkswagon Touran, which was blocking the road. The thug screamed back at her, then later got out of her car and assaulted her walking along the sidewalk.  In the video, the thug can be seen pounding and dragging the victim, as two bystanders watch but take no action to help her. [2]

That wasn’t even the end of it. The Mirror reports,

The woman, described as white, in her early 20s, with long brown hair tied back in a pony-tail, and wearing a black vest top and grey tracksuit bottoms, then went to nearby shop and returned to see the woman noting down the vehicle registration number.

She then assaulted her again, before returning back into her car with the male driver and driving away.

The victim reported cuts and a bruise on her head afterwards. The police still have not found the suspect, and issued this statement: “The assault took place in the middle of the day and we are asking for anyone who say the incident or who recognises the woman driver to contact us. The woman assaulted suffered pain and discomfort following the attack and may have lost consciousness for a short time.”

It is not only disturbing that people are this sick/mentally ill/angry that they would do this, but also quite disturbing that none of the bystanders intervened. It’s not like the attacker was some 300-pound huge man. It is a sad commentary on society that we have become this rude, cold, and uncompassionate. Chasing Judeo-Christian values out of the public sphere and the schools no doubt has contributed to the societal disintegration.