VIDEO: Shooters are Firing Their Rifles, When One Woman Makes an Explosive Discovery About what NOT to Do

Firearms are dangerous. They are not the self-possessed man-killing machines the left would have one believe, but like a chainsaw or a butcher’s knife, they can kill if not handled properly. In a new report by IJReview[1], a woman discovered firsthand how to handle a squib load malfunction and what the consequences could be. 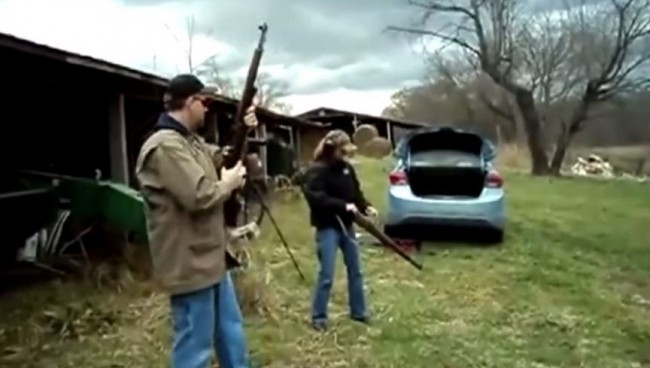 A couple of rifle shooters were just firing away on a range, when a woman makes a hair-raising discovery about what not to do when encountering what appears to be the dreaded squib load[3].

When her rifle misfires (sometimes squib loads are accompanied by a characteristic hollow ‘ping’ or various other sounds), she doesn’t think twice before reloading the weapon and proceeding to shoot…

Firing the weapon after a squib load can result in catastrophic damage. (For more on this phenomenon, see here[4].) Another theory is there may have been an out-of-battery discharge[5].

If one is in doubt about handling a rifle, shotgun or pistol, it is never a bad idea to take a Firearms Safety Course[6].

A squib load is when there is not enough propulsion to shoot the bullet all the way through the firearm. With a bullet lodged in the barrel, a shooter can blow-up their gun (and possibly themselves) if they do as this woman did and reload and shoot another bullet (and the following gas from the explosion of the second round) into the clogged barrel.

Thankfully, this woman learned a valuable lesson and appeared to have suffered few consequences other than a blown-up gun and some unnerving memories.