Though the left loves to pretend that American values are an affront to women, homosexuals and various minorities, they routinely overlook the horrendous atrocities committed in the name of Allah. Recent footage has emerged showing ISIS fighters actually laughing while a woman is screaming while being raped nearby.[1] Still, we continue to hear about the “war on women” being waged in America as conservatives question why we should buy Sandra Fluke birth control. 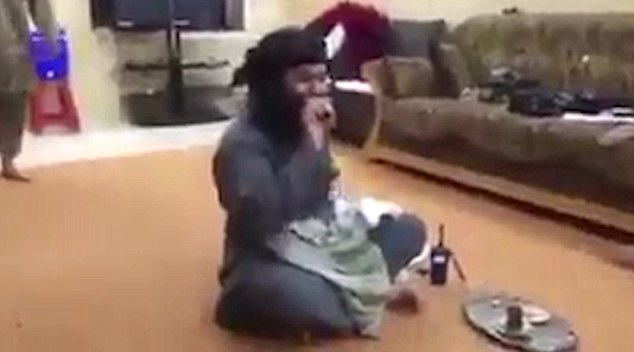 Harrowing footage from a dead terrorist’s phone appears to show ISIS[3] fighters laughing and joking while a woman can be heard being raped in the background.

One suspected ISIS fighter sits in the middle of the floor playing with his friend’s underwear and sipping from a small glass in what appears to be a living room.

Two far affiliates sit on a large sofa laughing at the seated man as he gestures with the clothing and a fourth man can be seen milling around in the room.

All the while, a woman can be heard wailing nearby, but the pictures are not picked up on video

Speaking in an Iraqi accent, the man sitting on the floor says: ‘I went to Abu Aziz when he shouting for his slave and I stole his clothes – now I came here and now he has no clothes.

‘I arrested his clothes (joke).

‘Now I’ll let him go out of the house naked with no clothes. This video is for my love Abu Aziz.’

The video was captured on the phone of a dead ISIS terrorist, according to Radio Sawa[4], who say the clothes belong to the seated man’s friend who is carrying out the rape.

As well as the distressing screams of the woman, commands can be heard coming from a walkie-talkie which is sat on the floor next to the terrorist who is sat cross-legged on the floor with a tray in front of him.

It is understood the slayed terrorist died in Shirqat near Mosul, Iraq.

Let me guess: you haven’t heard about this video, have you?

Instead, the Democrats and their counterparts in the mainstream media focus on whether Donald Trump is kind enough to women.

This video is truly sickening as is the flagrant hypocrisy of the mainstream media that ignores this kind of narrative.