VIDEO: Snake gets into a fight with a cat… while being eaten alive by a toad

Cats and snakes are no stranger to fighting, but this showdown had a gimmick – the snake was fighting back from inside the mouth of a toad.[1] 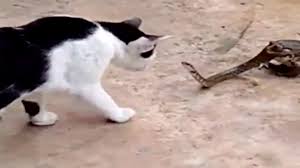 The unusual encounter was caught on camera from the moment the cat tentatively approaches the reptile.
It is unclear whether the cat has noticed the snake is being eaten from the tail up by a huge toad – or whether that has made the serpent seem more intriguing.

At one point the cat manages almost to stroke the top of the dying snake’s head, but it soon retaliates.
It’s unclear whether the cat is a pet or a stray, but it’s unlikely the toad and snake were domesticated.
The video ends with the toad suddenly animating, and forcing another chunk of the snake into his stomach.

Alright. So this could be a serious example of when nature attacks, from BOTH ends. Did this snake not care that he was getting chomped on from behind?

Honestly, the weirdest video I’ve seen in a while.