VIDEO: Sneaky White Tiger Creeps Up On A Visitor At A Zoo Before Launching A Lightning Attack… 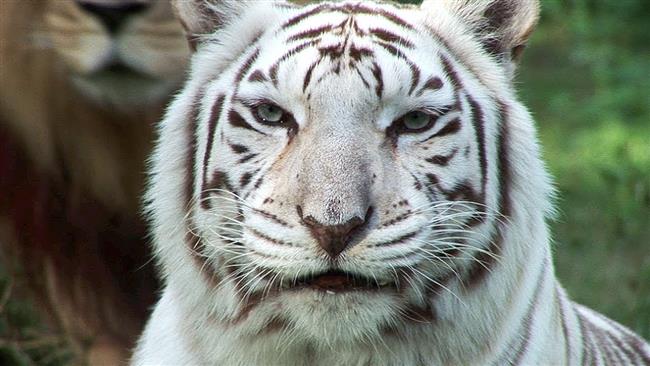 An unsuspecting visitor to the Chimelong Safari Park, located in Guangzhou, southern China, was on the menu wish list of the zoo’s white Bengal Tiger. Unbeknownst to the man, who was standing in front of the tiger’s cage, the large feline began sneaking up on him, classic cat style; with stealth, silence and the intention to pounce at just the right moment. As the man stands there completely unaware, video captures the beautiful but powerfully carnivorous animal doing what it was designed to do…stalk and attack prey.

The man turns around to look behind him, triggering the animal to lunge directly at him, stretched to its full height on its two hind legs. The man, startled, is saved from being dinner by the fact that between him and the impressive beast is some thick and impenetrable glass. Still, it has to be frightening to see that even with the glass.

The safari park, which includes about 320 acres, is the home of about 100 tigers. Among them is included Siberian Tigers, and Bengal Tigers; of which white tigers are a subspecies. White tigers are native to east Asia, and are the product of genetic rarity, meaning both parent tigers must have the recessive gene to produce a baby white tiger. This occurs in about 1 of every 10,000 births. Though they are rare in the wild, they continue to be bred in captivity based on their popularity with wildlife attractions, circuses, zoos and the general public.

The Tiger is one of the most beautiful big cats, with its legendary striped pattern. Both the orange tiger and white tiger are equally stunning. Big cat enthusiasts around the world covet the opportunity to see them up close, that is provided by zoos and natural parks. But a study of the habits of this stunning animal reveals that it is fierce, and a force to be reckoned with. In a zoo, it’s fun to see the tigers. In the wild, a tiger is the last thing a person would want to see. Of course precautions are taken to ensure the safety of zoo visitors but nothing is perfect and it is recommended to be alert at all times. Though this man in China did not become dinner for the white tiger, it only takes an unlocked door or a careless mistake made by park personnel to turn a day of fun into a day of tragedy.

The ferocious creatures of this planet demand our respect, and they will have it, one way or another. In every Tiger is a carnivore waiting for dinner. And if we want make sure that we are not in the eye of the tiger, we must keep our own eyes open, even in places which have been specially designed to house these members of feline royalty. Roar!