VIDEO: Steve Harvey called this the “greatest answer he’s ever heard” and his reactions are just priceless

One of my new favorite things on the internets are these videos from Steve Harvey’s “Family Feud.” Whoever had the idea to release them as clips was brilliant, and this one[1] is in fact as funny as the headline says… 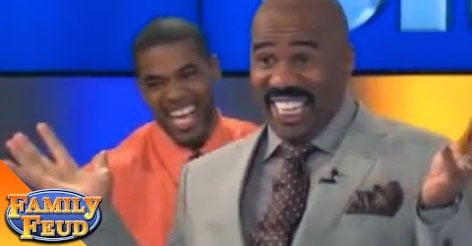 There were too many great things about this classic Family Feud episode.

It started off with the category: “Name something that follows the word pork.”

The woman representing the Brown family buzzes in right away and yells out LOIN! To her credit, she did a shocked Steve Harvey a favor by spelling it out l-i-o-n — yes, lion. Her male opponent said belly, but the Brown’s won and elected to play.

Watch the video below. If you ever get a chance to watch the show, it’s the first remake since Richard Dawson that is actually very good.