Over the last few days, the race-obsessed “protesters” who have dominated news for months took issue with police crashing a supposedly innocent pool party and harassing black kids. Now, like so many racial narratives before it, this “innocent” narrative is falling apart.[1] 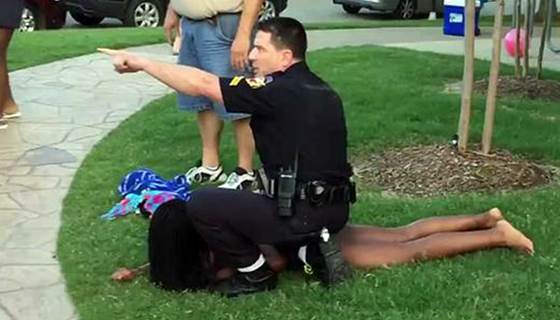 More details details emerging about Friday’s pool party in a Texas subdivision that’s making national news because of how police dealt with teenagers on the scene, and they’re not helpful to those trying to make all cops look bad.

One Twitter video reported by Breitbart, for instance, shows the kind of mayhem that was taking place when police were called to the McKinney, Texas, development.

Even assuming that it was a comment — that blacks should go back to public housing –that led to the fracas, it gives viewers who saw only the earlier video of a police officer grappling with a young, bikini-clad woman, a somewhat different idea of what was going on.

(The video was posted to Twitter by an outlet called Revolution News. [7]It’s editorial slant should be fairly easy to guess.)

This Facebook posting,[8] by a resident of the subdivision, gives a different idea, too. The resident, identified on Facebook as Benet Embry, also happens to be black.

Oh, I say and I say it again, ya been had! Ya been took! Ya been hoodwinked! Bamboozled! Led astray! Run amok! MediaTakeout.com[9] posts a story showing only 7 minutes of a 30 minute ordeal, makes it racial and all the activist come a running. Look, I LIVE in this community and this ENTIRE incident is NOT racial at all. A few THUGS spoiled a COMMUNITY event by fighting, jumping over fences into a PRIVATE pool, harassing and damaging property. Not EVERYTHING is about RACE. WE have other issuses that NEED our attention other flights of made up make believe causes.

No, it’s not always about race.

And while just about everyone can agree that the officer who pulled his gun was dangerously overreacting — and doing so in a way that could have been tragic — the news that there was already physical violence on the scene is definitely affecting some views.

The left is irreparably damaging their cause and making it impossible to speak meaningfully about race in America.

But then again, a candid conversation is not what they want; detailing facts surrounding race in America will only prove the ridiculousness of their perpetual temper tantrums.

So… Police were responding to a violent brawl, not a "teen pool party." Hmmm http://t.co/LgYxaie4ua[10] #McKinneyPolice[11]