Video: Syrian Migrants Tell Europeans They Either Want Better Food & TVs Or They Go Back To Syria 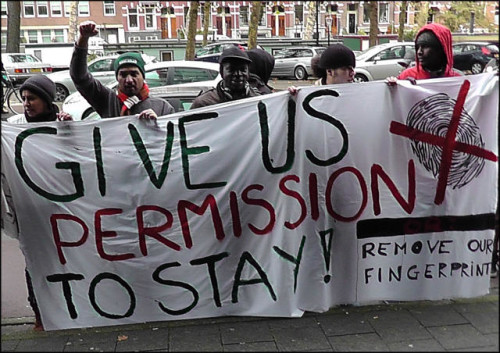 There’s no shortage of ungrateful people [2]around the world. From American college students who have everything but whine anyway, to Syrian refugees who are being freely given what they need, the attitude seems to be “We want more”. Should the Netherlands, or any European nation for that matter, continue to take in people who do nothing but complain and make demands?

Clearly used to appearing in front of a television camera, a glamorous, well-coiffured and made up Syrian migrant launches into a tirade against the generosity of Western European states. Gesturing to the modern accommodation building behind her, the clearly middle-class Syrian complains in perfect English: “This is not a life when you get inside to a room without a TV. Just a bed, there is no fridge, no lockers, no privacy”.

Telling the television crew why the group of 15 had walked out on their free accommodation and food, the woman said: “we’re going to stay outside because we don’t want to eat this food, and we don’t want to stay in the room. We’re running away from our country because of the situation, and now we live in a jail.

“Here, it is not a life. There, we know there is a war, but here there is no life. You are sitting here in jail. It’s the same situation, but in Syria you can live for real. They are giving us just 12-12 Euro [a week]. It’s not real”.

Not being given enough free money, food, or luxurious accommodation by Western governments is by no means the end of the gripes aired by migrants whenever they can find a television camera to talk to.

One man speaking lamented he was unable to turn back and go home, and complained about the Europeans he had met. He said: “Here it is so cold and nobody cares about us. Now we want to go, to move, there is no way back. We have already crossed seven or eight borders”.

It may seem at times that migrants are almost as opposed to mass migration to Europe as natives. interviewed yesterday as Sweden prepared to close their borders to alleviate the migrant crisis brewing within their nation, a group of newly arrived asylum seekers celebrated the policy u-turn. One young man said: “Close the border. We are far too many who have come. They can not take care of all of us”.

Seeing no irony in his statement, a Syrian migrant said: “I’m surprised how it is here in Sweden. If they can’t take care of us properly, they should not take so many”.

Being a refugee doesn’t give you the right to be rude and demanding. These nations taking in refugees are trying to help. But the idea that you can go to a new nation and be given everything indefinitely is ridiculous. Reasonable, thankful people go with the intent to add value to society, to work hard and make a place for themselves in their new home. If that is not their intent, if they are there to get free handouts and then bite the hand that’s feeding them, then indeed, perhaps they should go back to Syria.