I don’t know what’s more shocking, the record or that kids even still know what a Rubik Cube is in the first place.  Either way, Collin Burns solving it in under six seconds[1] is impressive. 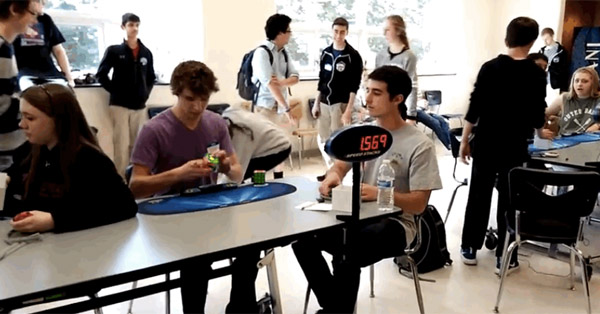 During the final round of a Rubik’s Cube competition on Saturday at Central Bucks West High School in Doylestown, Pennsylvania, Burns broke the world record for fastest time restoring a 3x3x3 Rubik’s Cube, solving it in just 5.25 seconds. The previous record, held by Mats Valk from the Netherlands, was 5.55 seconds.

Although the record has not yet been updated, Saturday’s competition was an official one held by the World Cube Association.

The video is pretty loud, so you may want to adjust your volume. Watch and be amazed…